N.C. educators are calling for a change

The sea of red-clad protesters in downtown Raleigh braved the early summer heat and rain showers to convene on the doorstep of the North Carolina General Assembly. They had come on behalf of students and educators across the state – a constituency they felt had gone far underserved by the legislature for far too long.

Many attendees at the March For Students and Rally for Respect were themselves teachers. Their presence at the protest meant dozens of school districts across the state closed on May 16 in their wake. About 68 percent of North Carolina’s public school students were out of class for the day as educators assembled to voice their grievances and their pleas for adequate funding. Though they all had their own unique stories and experiences in the classroom, they shared the same feelings of frustration, and the same sentiment that enough was enough. 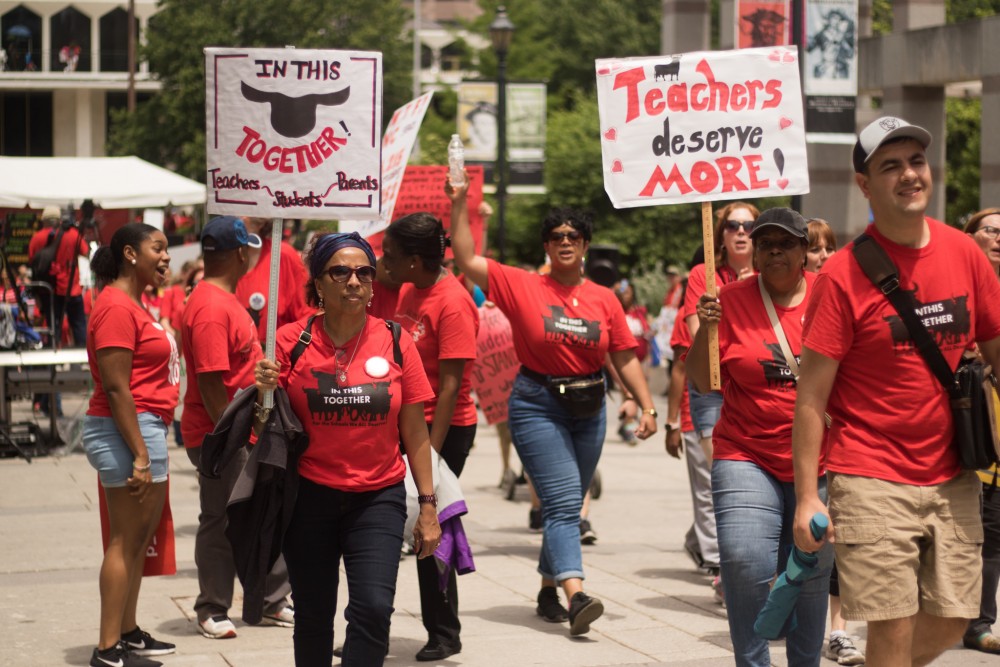 Rachel* is a teacher in Guilford County.

“I just feel so bad for students. They’re the reason I’m here,” she said. “I’m obviously not in this job for the money. This isn’t about a higher salary, although that would be nice.”

In tandem with this sentiment, Rachel held a sign that read “not here for a raise” as she stood in line to enter the State Legislative Building. She said she has been a teacher for 10 years now, but before this she worked in a non-school environment. The shift to a public education setting was jarring.

“If you worked in an office, you’d never deal with the kinds of awful conditions we deal with in our classrooms — the roaches, the rats, the lizards,” she said. “But the public doesn’t see it, and the kids just take it as granted.”

She said she has taught in two different school districts in N.C. which received vastly different funding. She said she thinks the resources made available to schools should be equal, especially because schools in poorer districts are put at an even further disadvantage because they get so much less.

“The kids are losing all around,” Rachel said. “Even teachers have a breaking point.” 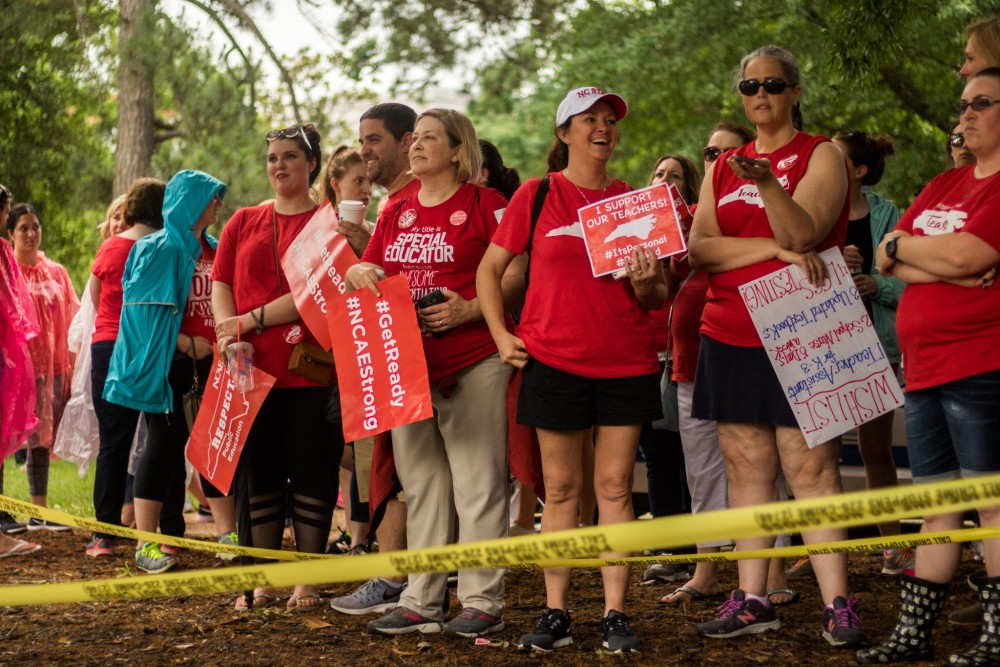 Further back in line, Jennifer, a Seawell Elementary School teacher, held a poster displaying photos of her classroom in various states of disrepair. She said the recurring sewage floods and the holes in the walls documented in the pictures are almost common incidents in her school.

She recalled wading through sewage in her rain boots, carrying children out of the classroom so they wouldn’t come in contact with the waste. But there are so many facilities in need of repair at the school that it can take a year to get a work order filled, Jennifer said, and it seems plumbing issues are always last on the list. Other issues, like the holes in the classroom walls, she and other teachers have learned will only be repaired if they do it themselves.

Another photo on the poster showed a dead snake at the bottom of a bright blue bin. Jennifer said at least two other snakes have been found in other classrooms, but they were luckily already dead as well.

“My student came up to me and said, ‘Miss, there’s a little critter in my book box,’” Jennifer said. “I thought it was going to be a bug or something, I did not expect a snake.” 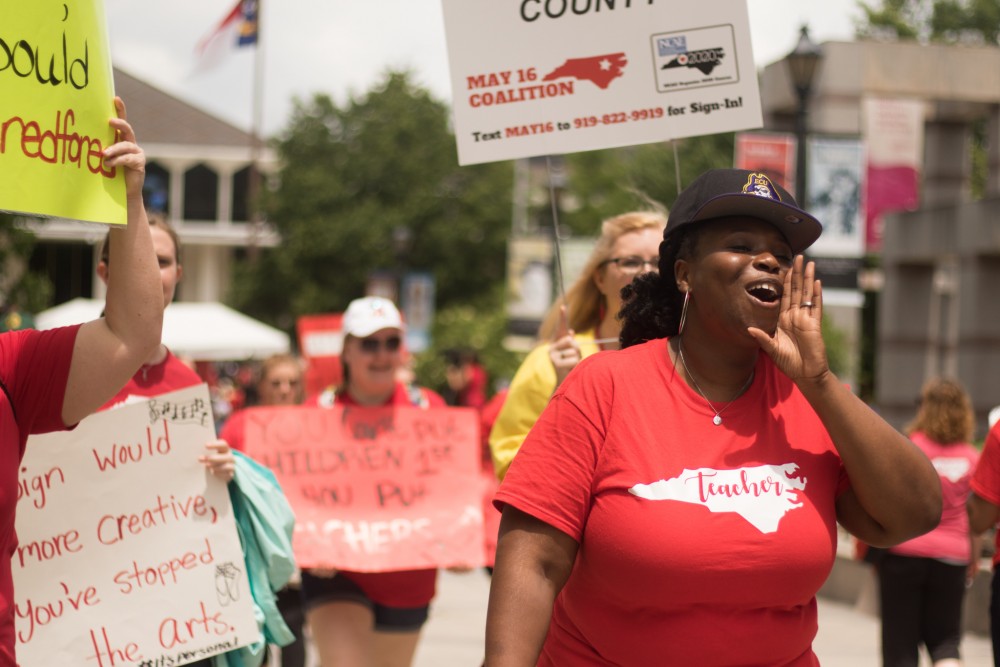 Barbara and Danaya* traveled from Cumberland and Guilford Counties to participate in the march. They all teach at Title I schools — institutions that receive federal assistance because of the high percentage of students receiving free or reduced meals.

Despite the additional funding, problems abound in both of their school systems. They said their schools often struggle to finance just the essentials, from paper and pencils to lunches for students below the poverty line, let alone supplementary materials to help students excel.

“These students are poor, and therefore can’t access the technology that others can,” Barbara said. “But after we provide so many meals, we can’t afford all the MacBooks that the kids at the school down the street have.”

Teachers often have to foot the bill for classroom supplies, they said, but with North Carolina consistently ranking near the lowest teacher salaries in the country, simply supporting themselves can be a challenge. Though pay has increased in dollar amount in N.C. over the years, after adjusting for inflation teachers today actually bring home around 12 percent less than they did during the 1999-2000 school year.

“There are teachers working two or three jobs, who qualify for public assistance,” Danaya said. “We’re expected to do so much for students when we can’t even do for our own.”

Still, this group of teachers said they notice staff salaries are usually one of the first expenses to get cut. Barbara said her school downsized from three fifth-grade teachers to two this year, so there are now 32 students per class. But funding fluctuates so often that schools cannot be certain of what resources they will be able to afford from year to year.

“We have to share our nurse and our psychologist with the other schools in the district, so they’re each only here maybe one or two days a week,” she said. “Us teachers are just expected to do it all.” 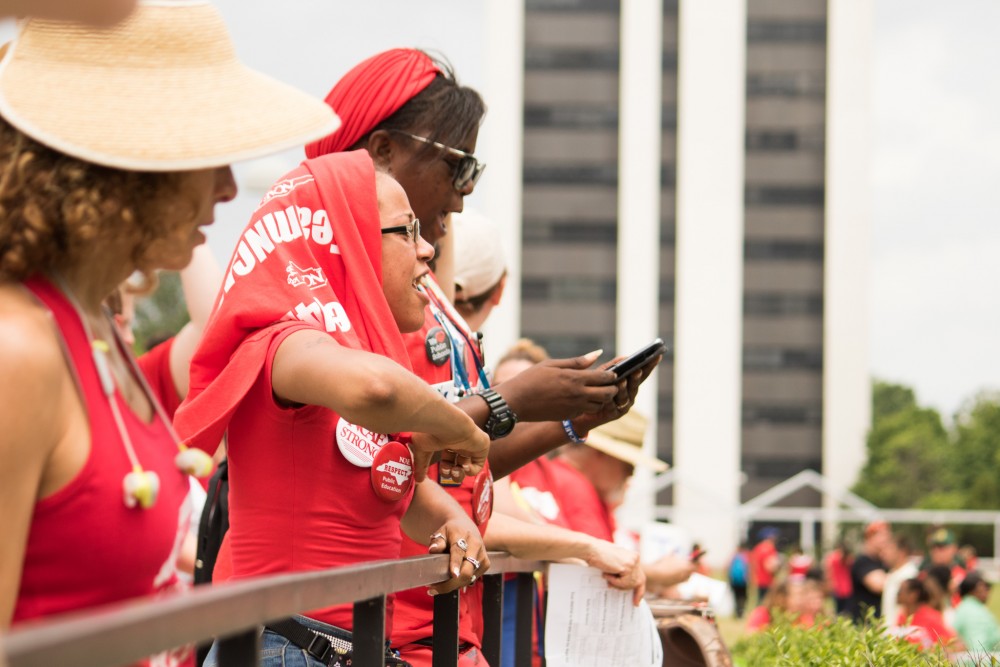 Nicole is a counselor at one of the lowest-ranked middle schools in the state, Philo Hill Magnet Academy. She touched on an abundance of faults within the school’s curriculum: students have a deficit of transferable skills, they have poor concept knowledge, the school employs so many substitute teachers that “it operates like a babysitting service.”

Yet the issue of mental health which is integral to student success is rarely, if ever discussed, Nicole said. She said that she has noticed more and more suicidal ideation in students, but the school doesn’t have the funding to give these students the help they need.

“Counselors are expected to do these complex psychoanalysis they’re not trained for,” she said. “Counselors aren’t prepared to handle the things they’re having to handle.” 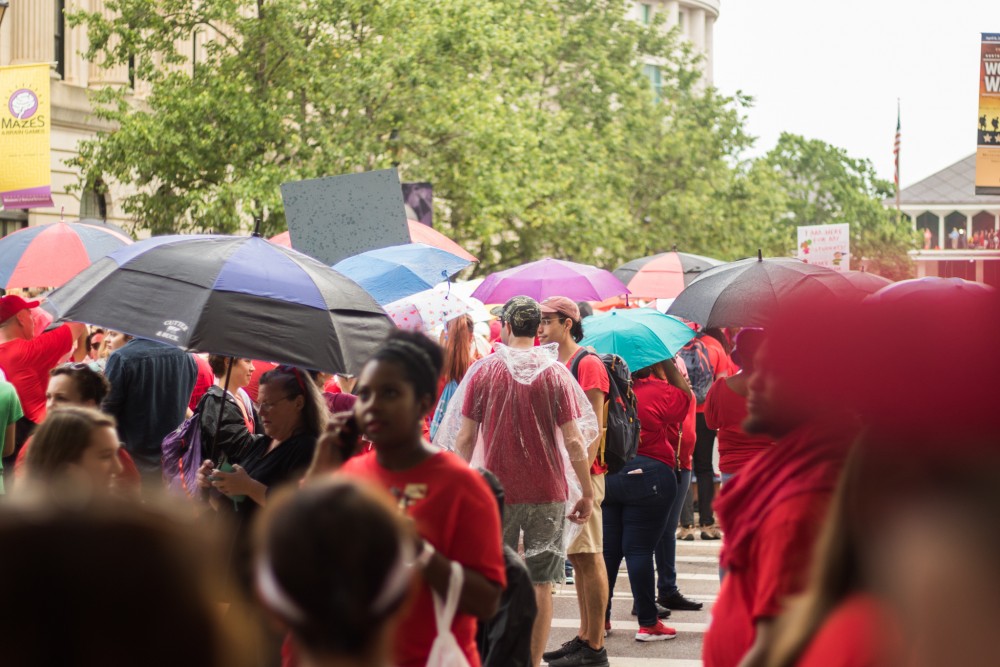 “I’m lucky that I get allotted $5 per kid to spend on books,” Cordeiro said. “It’s not a lot, it’s not enough, but lots of librarians have $0 to buy books.”

She said the state allocates library funding based on a certain dollar amount per student, but some counties have to divert that money to cover other costs.

Books aren’t the only library expense schools must finance, but money for computers, software and other tech is often hard to come by. Cordeiro said that the technology available to students at St. Stephens can be outdated by 10 or 12 years because the school cannot afford to update it, yet the N.C. curriculum standards continue to include more and more digital literacy requirements.

“They don’t give us the funding to have the technology we need to meet their digital learning mandates,” she said.

Cordeiro wasn’t always duct taping decade-old laptops back together, however. She said when she first started her career as a French teacher around 25 years ago, North Carolina was at the forefront of education. That status started to change once the 2008 recession hit and state legislators began cutting budgets. Cordeiro said she thinks that since then, different legislators have had different priorities, but education never topped the list.

“Teachers have always been expected to do more with less,” she said. “But it’s time to stop making it work. We need a change.”

*Some educators are identified by first names alone to respect their request for privacy.