Restaurant Review: Imbibe is a Taste of New Orleans

Mandey Brown does it all: she’s an artist, a graphic designer, a singer, a bartender, a bar owner and, most recently, a restaurant owner.

Brown moved from New Orleans to Chapel Hill in 2005, because of Hurricane Katrina, and as with many aspects of her life, her family played a large role in that decision.

“I had family in Hillsborough, so I knew the area and thought it was such a great place. So I moved up here and started bartending. Then in 2010 I bought Zog’s Pool Hall, which is right upstairs,” she said.

When Brown says ‘upstairs,’ she means upstairs from Imbibe — the newer of her two establishments. Situated on Henderson Street, Imbibe simultaneously has the feel of a hip, industrial-chic dive and a high-brow speakeasy.

The lines are clean, the immaculate bronze draughts and Basque cider well cleaner and the dim lighting and frequent sounds of jazz music invite you to sit down to a beer flight or glass of wine and chat with friends for hours. But despite the quite polished look, one is not surprised that Zog’s and Imbibe share an owner.

“The thing that connects the two is first, clutter. Zog’s is the inside of my brain. My living room looks exactly like Zog’s. But it’s cozy,” Brown explains, “When I opened up down here, I thought Zog’s can be messy and cluttered and down here will be sleek and clean and nothing but beer taps and tables. But within a week, I thought this place has to have some sort of personality. So I dressed it up a bit with artwork and funky lamps and jewel tones.”

After opening, Brown decided there was one thing missing — food. She explained that she began by offering spiced up bar fare. Loaded fries and broccoli cheddar bites were staples on a menu that, while having standalone merit, was also designed as a way to keep in customers who would regularly leave Zog’s in search of one of the myriad options for pizza on Franklin Street.

Once Imbibe began to grow, however, Brown’s ideas about her menu evolved.

“Before, the food was good, but it was all just fried bar food. It was tasty, but our customers were coming for jazz nights and events like that, and it just wasn’t the kind of food you want in a dimly lit room listening to jazz,” she said.

Now, Imbibe has quite the full menu for both lunch and dinner, offering everything from genuine New Orleans muffalettas to a blackened catfish po-boy. During my visit, I tried both offerings.

The blackened catfish was incredible — perfectly sharp, but not overbearingly spicy, filling yet light and flaky, and served on a crispy-on-the-outside-reminiscent-of-a-cloud-on-the-inside buttered roll with aioli, lettuce and tomato. The muffaletta was similarly exquisite — served on bread flown in from Gambino’s Bakery in the heart of New Orleans, owning a balance of perfectly salty ham and salami and nutty-sweet provolone, and loaded with olive salad with the best executed punch-packing to not-overbearing ratio this author has yet tasted. 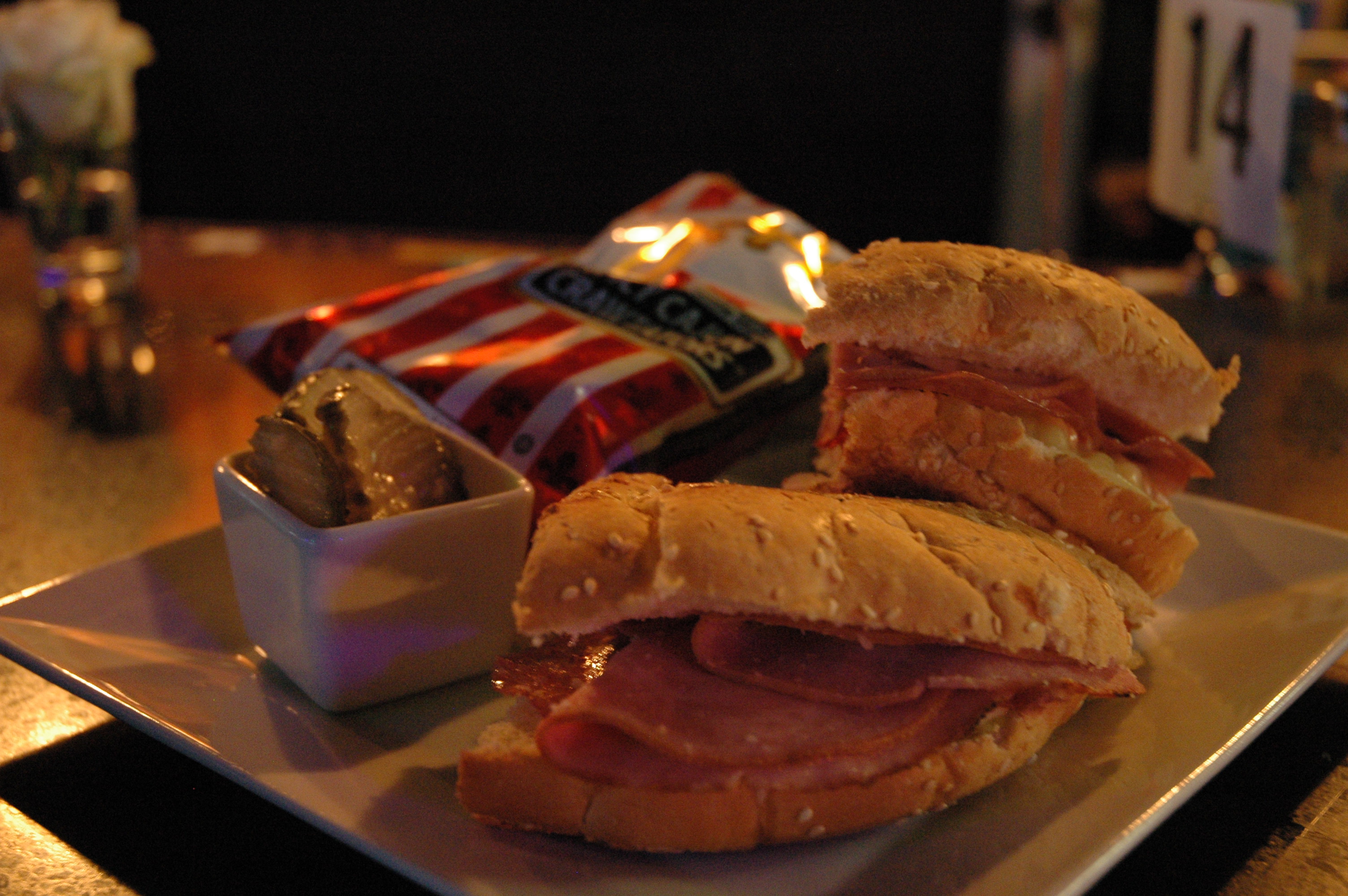 Brown explained that her menu was developed through equal parts intuition, staying in touch with what customers wanted and, indeed, help from family.

“I come from a family of cooks. My grandfather, Paul Blangé, actually invented Bananas Foster at Brennan’s in New Orleans. Now he’s the resident ghost at Brennan’s on haunted history tours,” Brown said, “And my mother is an exceptional cook. My mom used to share recipes with me for Imbibe. Now she comes in one day a week and we make the crab bisque soup together and get to talk and spend quality time together.”

From the decorations on Imbibe’s walls, to the involvement of her family, one senses Brown’s strong commitment to staying genuine — everything about her establishment tells a story about Brown, her family, or where she’s from.

“New Orleans is so much bigger than just a city. It’s a culture, and people are attracted to it. Everyone who’s been to the city has that wonderful memory of sitting on a sunny street corner at a tiny muffaletta shop eating the best sandwich they’ve ever had in their life,” Brown said, “We want to give everyone whos ever lived in New Orleans, or went to school there, or even just visited a taste of the city.”