Red insulated tote bag in hand, I place the first cheese of the day into my mouth in front of Boxcarr Handmade Cheese’s table.

It’s called Rocket’s Robiola, and it causes me to close my eyes in delight.

Weaver Street Market’s Curds and Crafts Festival, housed in Hillsborough’s The Cloth Mill at Eno River, boasts more than 30 vendors of handmade, artisan cheeses, craft beers and other foodstuffs such as crackers, jellies, jams and pickles.

For the artisans themselves, this is an opportunity to connect with their customers. Austin Genke of Boxcarr Handmade Cheeses in Cedar Grove, North Carolina tells me about his favorite part of festivals such as this.

“It’s connecting with the customers and exposing them to something they might not have tried before,” he said.

This is certainly also the case with Ky??kz, a pickle company based out of Hillsborough, North Carolina. Their bread and butter pickle, a new recipe, is sweet on first taste, but slowly heats up my mouth.

Lindsay Bisbee, the founder of the company, tells me she feels like her pickles make a nice addition to a meal, since things like pickles and jams can help break up the tastes of different dishes.

Another of these options is the pepper jelly spread with cream cheese onto crackers by the ladies of Two Chicks Farm. Unashamedly, I come back for seconds, thirds, and dare I even admit fourths, for their Ginger Pepper Jelly.

Each table is arranged strategically. There are three sections, each arranged in a square, with vendors standing inside the square and patrons walking the perimeter.

Breweries are alternated with creameries and other food items, and even within the item categories, it is clear the arrangement is thoughtful — the goat cheese makers are not grouped into one square, for example, but are spread across all three.

In the corner, patrons can line up alongside a display of Weaver Street Market breads, sampling and choosing one to take home with them as part of the price of entrance. Each person, inside their red tote given at the door, was provided with a one free loaf of bread coupon as well as a five dollar coupon for any cheese at the festival.

The breweries, for the most part, each offer two taps, and patrons walk around with their glasses, asking for samples. Buckets are provided on many of their tables for patrons to dispose of extra beer, which allows patrons the freedom to sample as many beers as they want – and as many times as they want. Not much of a fan of IPAs and sours, I stick to the wheat beers and even try pumpkin ale from Big Boss Brewing of Raleigh. Of the 12 breweries present, all are from within the state of North Carolina, and seven of those 12 are from within the Triangle region.

The Ponysaurus Brewing Company of Durham, North Carolina, has two signs describing their beers, and I opt for the one marked “pears crackers almond.” Unsure how to pronounce the name, I try my best at a French accent. “Biere de Garde?”

“Yep! Just imagine a French person saying it – it’d sound like that,” one of the men working the taps responds. This small interaction makes the Ponysaurus beer the most memorable, because of the real interaction between maker and customer.

Gail Hobbs-Page, cheesemaker and owner of Caromont Farm in Esmont, Virginia, said she enjoyed the event.

“This area is particularly devoted to local cheese makers,” she said. “It’s great to talk shop.”

Page tells me cheesemaking is not a niche community.

Page once worked in the kitchen with Ben and Karen Barker of Magnolia Grill fame, but left the industry to escape commercial farming. She decided to begin making her own cheeses instead, and when restaurants would try her cheeses, put them on the menu and then use other cheeses under the same name, she began making cheeses no one could describe.

One such example is her debut of the Chestnut Grove Blue, named for the next road over from the Caromont Farm. It is a foil-aged cheese, which means it is allowed to bloom, then wrapped in foil and aged for two months. 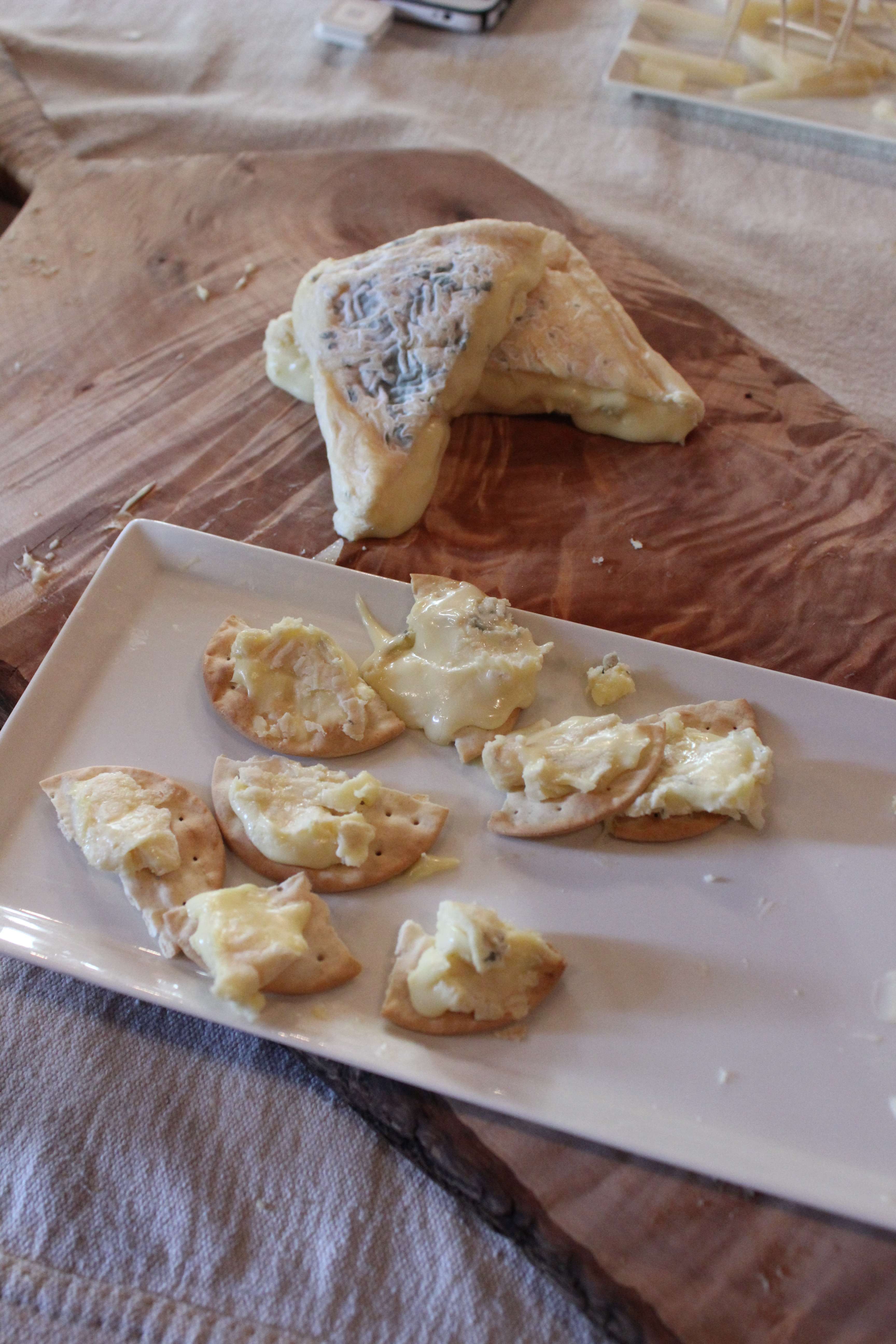 Because Page is one of the few cheese makers not from North Carolina — only three out of the eleven — she purposefully brought cheeses not represented by North Carolina cheesemakers.

“We’re the new kids on the block,” she said.

Brit Pfann, of Celebrity Dairy, a noted figure at the Carrboro Farmers’ Market, where I spoke with him, told me he thinks most people at the event will probably already know who he is, since he’s been making goat cheese for 30 years now.

This is in response to my asking if he will see any upswing in profit from the event. If he sells a lot, he tells me, he might increase production by one Carrboro Farmers’ Market amount or so.

Some patrons walk around wearing necklaces strung with pretzels. Another man, wearing glasses and sporting a white beard, asks about the aperture on my camera and remarks, “You don’t sound like you’re from around here.” The patrons range from college students eager to sample cheeses and beers to older adults looking to better curate their cheese boards, thoughtful in their purchases. 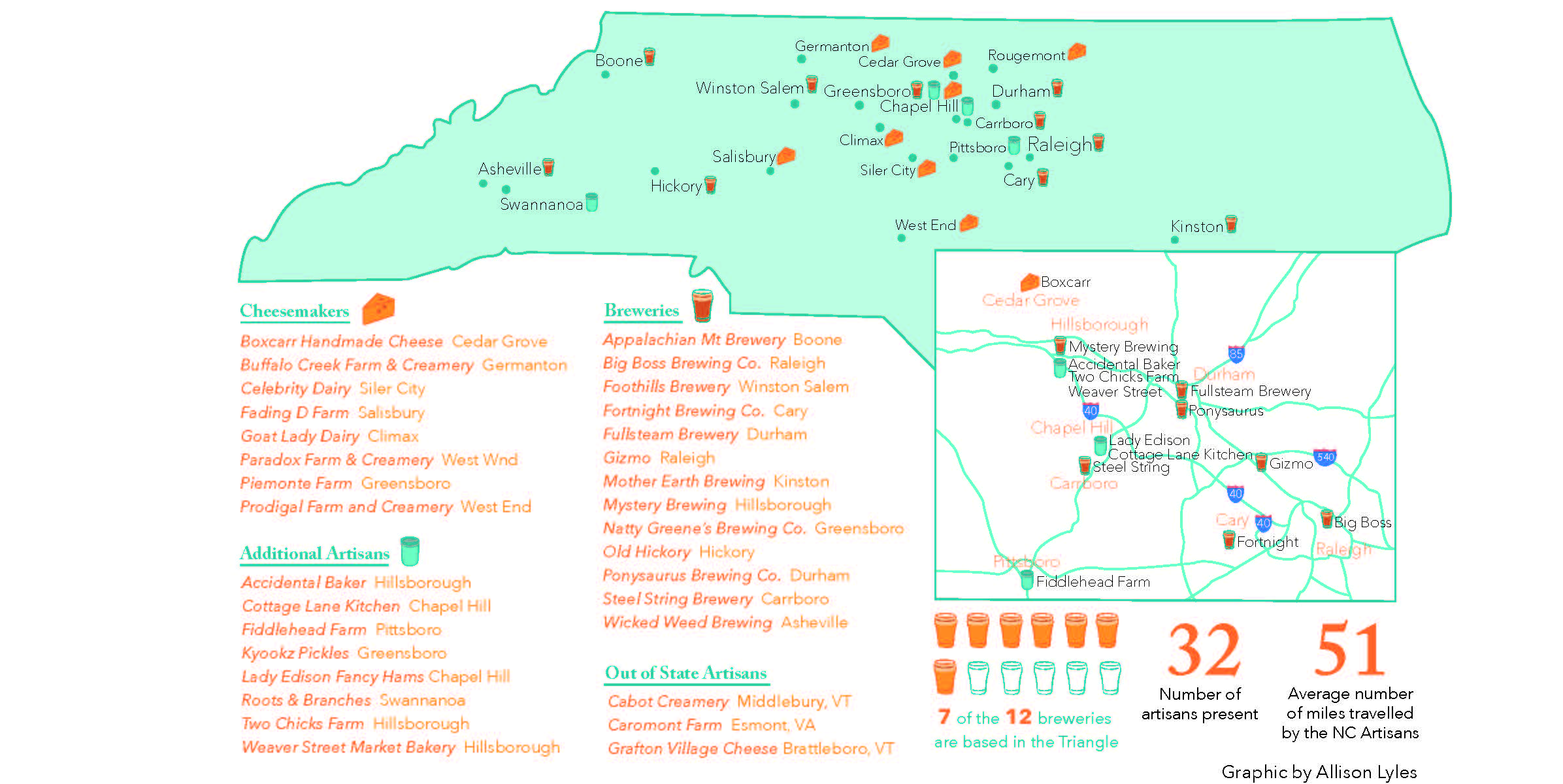 As the event nears the two-hour mark, the crowds begin to thin, and I frantically dart around, looking for the last sample of each cheese. Thankfully, many of the vendors sell at local farmers’ markets and some at local grocery stores, such as Weaver Street Market.

The Curds and Crafts Festival is much like a speed dating event: try one product, and if you like it, keep dating it, but if not, there is no pressure to buy. I walk away, and after they ask if I am okay to drive, I say yes, but “I’m in a fit of ecstasy.”