The History of Jordan Lake

Bald eagles have taken up residence along its shoreline, and beavers have built their dams along its banks and tributaries. Families set up camp, fish and bird-watch. It might be hard to imagine what this area looked like prior to Jordan Lake, but only 30 years ago it was farmers tilling this soil, not fishermen looking for a weekend catch.

It began with a flood.

The Cape Fear River was spilling over during September of 1945, and the residents of Fayetteville found themselves in flood waters of almost 70 feet. The Homestead Hurricane had made landfall in Florida and pushed its way through the South, inundating already soggy central North Carolina and causing the Cape Fear River to reach record flood levels.

Although there were no deaths, damage to Fayetteville alone amounted to $2 million, or roughly $26 million in today’s economy. In response to the widespread flooding, the Army Corp of Engineers began making plans for a reservoir, which would be located in Chatham County.

In 1963, after about 20 years of federal government foot-dragging, the plans to develop this reservoir and better manage the Cape Fear River watershed were passed by the 87th Congress of the United States. The bill developed flood control and better water management across the country in at least 14 states. 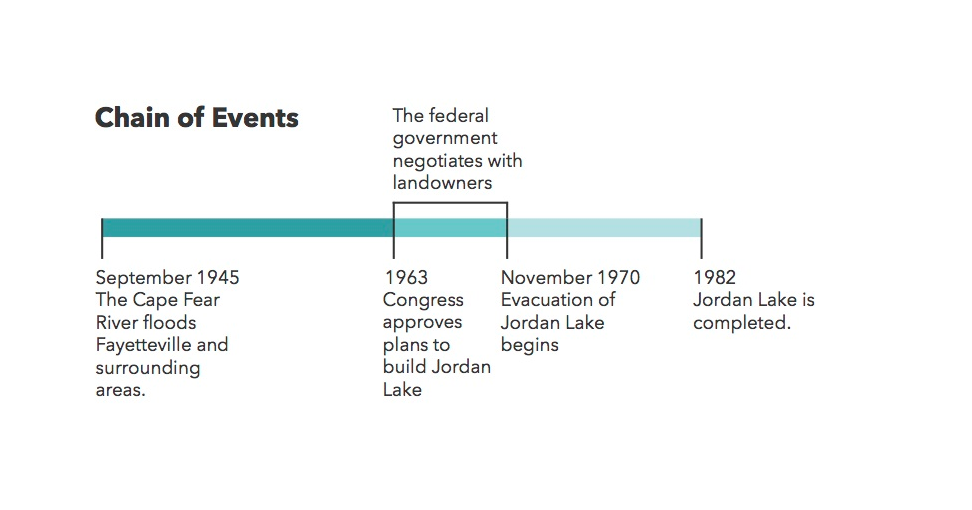 The reservoir, which would come to be known as Jordan Lake, would help gather runoff and make sure it did not overwhelm the Cape Fear River again.

The excavation of Jordan Lake began in November of 1970, almost seven years after the initial bill of approval had passed. Between 1963 and 1970, the federal government negotiated with the individuals who owned the fields and pastures that were necessary for the creation of the reservoir.

“Prior to the lake, this area was a farming community,” said park ranger Steve McMurray. “There wasn’t necessarily a city that was here. The only thing I have in my records is the city of Lockville, which of course is no more.”

Lockville, the site of the Cape Fear and Deep River Navigation Company, was ultimately destroyed to make way for Jordan Lake. As of 1872, Lockville was home to only 150 residents.

Jordan Lake was completed in 1982.

Today, Jordan Lake is home to about 18 active eagle nests and roughly 36 different eagles. Nature enthusiasts like Ellen Tinsley, a former veterinarian, come to this body of water to capture these birds’ beauty on camera.

She hopes that everyone gets to catch a glimpse of the eagles.

“I was out looking for places to shoot, and I saw the sign. I turned into Jordan Lake and never turned back.”

The Rise of Durham’s Culinary Kingdom
A Burst of Blueberry