With a Democrat in office and a healthy per capita GDP, North Carolina’s UI ranking may come as a surprise. Since the overhaul of the UI system by then-Governor Pat McCrory’s administration in 2013, North Carolina has seen steep and significant drops in its provisions to those who lost their jobs. Now, five years later, the cuts that carried North Carolina from the middle of the pack to dead last nationally in terms of unemployment benefits persist.

The 2013 overhaul changed three major things about the unemployment insurance system: weekly payment amounts, the number of weeks eligible to receive benefits and the application process.

The average weekly payment to eligible applicants was lowered by $50, which Vroman notes was the greatest decline of any state in the country. The maximum weekly benefit dropped from approximately $530 to $350, about a 33 percent decrease.

The number of weeks unemployed individuals could receive benefits transitioned from 26 weeks to a sliding scale in which the maximum number of weeks changes based on the state’s unemployment rate and can now drop as low as 12 weeks. While Vroman notes a national downward trend in duration of benefits, North Carolina’s cuts seem to outstrip those of other states. 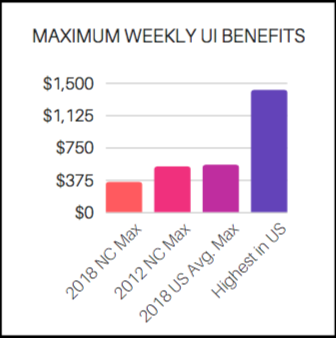 “We also think that sliding scale ignores problems that you have geographically in North Carolina where there may be high unemployment rates,” he said. “The idea that the state has a low unemployment rate and there must be jobs available ignores the fact that in some parts of the state, that’s not true and also for certain populations, that’s not true, especially for older workers. And so we think that the sliding scale idea is not a good one and should be changed to a set number of weeks.”

Patrick Conway, chair of the Department of Economics at UNC-Chapel Hill, echoed this sentiment of uneven unemployment distribution.

“I would say that the people I think who are suffering the most (from the policy change) are those who had manufacturing jobs before, who lost them during the recession, and who have not been able to find replacement jobs,” he said. “I’m thinking of places like Rutherford County, out west, where we have Spindale and Rutherfordton.”

The process of applying for UI fully shifted to an online system. This change has presented a host of problems, including issues of accessibility, computer know-how, technical glitches and troubleshooting.

“It took the personality out of it, of people being able to help them or talk to them about their concerns, and I think a lot of people were overwhelmed,” Hill said of the online system. “At that time in 2013, we had about 700 people during that layoff. It was terrible. I mean, over half of them probably got kicked out or were on hold because of the system. It was not being able to talk to someone and explain.”

Hill added the 2013 overhaul also included a requirement for those receiving benefits to accept any job offer that pays more than one’s weekly benefits.

“One of the big things that hurt is when they said if you get offered a job 20 percent (more than) what your benefit was,” he said. “Then you would have to take that job or you lose your benefits.”

Hill, who has seen seven major layoffs, each consisting anywhere from 300 to 1,500 people losing their jobs, said the loss of a job is about more than just money.

“You’re destroying people’s livelihoods and their emotions and everything else. But that wasn’t good enough. They went in there and said if you’re offered a job, now we’re gonna put a Band-Aid on it that’s gonna force them to take a lower paying job and just hope they don’t lose everything they’ve worked for the last 20 years,” he said.

The 2013 changes came in response to a $2.75 billion deficit in North Carolina’s unemployment trust fund, which had been severely depleted after the last economic recession in 2008.

UI cuts were made in order to repay the federal government what the state had borrowed. However, the debt was paid off years ago and Roy Cooper has recently taken over as governor, yet the cutbacks in UI remain.

The composition of the state legislature presents an obstacle to restoring benefits to a more balanced level. Any changes to the system must go through the legislature, which retains a veto-proof majority of Republicans.

“Many of the people who wrote the original bill are still in the legislature and they’re quite happy with it because it keeps taxes low on firms and it got the state out of an indebted situation,” Conway said.

Since the debt to the federal government was repaid, North Carolina’s unemployment trust fund has swelled to over $3 billion, which Vroman said is the highest the state has ever had.

Conway believes this could set a dangerous precedent for other states.

“Now, with North Carolina able to say, ‘Well, we’re no longer in debt. We’re growing OK. We’ve got a balanced budget,’ other states are probably looking at it and saying, ‘They didn’t pay such large consequences for doing this. We as a state can move in that direction, too,’” Conway said.

“In the short run they could pay an increased amount out of the current trust fund which has been built up during the last five or six years. But, to sustain a higher level of payment, they would have to raise the tax, the unemployment insurance tax, on employers. It’s currently at a very low level,” Conway said, when asked how the state’s UI could be balanced.

Many Republicans and firms, however, are reluctant to accept a higher tax on employers, and their voices often drown out those of the unemployed seeking aid, Conway said.

Rowe is hopeful that steps to rebalance the unemployment insurance system will be taken in 2019 when the legislature convenes for its long session. However, the longer the legislature waits, the more risk of another economic downturn increases, the effects of which could be catastrophic for the unemployed and the economy if these individuals are not spending.

“The time to have your unemployment insurance system in the right place and right-sized and funded properly is when times are good. Trying to make the adjustments when there’s high unemployment and huge demands on the system make it very difficult,” Rowe said.