There aren’t too many affordable, tasty lunch options within a reasonable walking distance from my apartment on Jones Ferry Road in Carrboro.

There are a couple of fast food joints, Chinese takeout, and, on the other end of the spectrum, a few high-end restaurants that are a bit out of my price range.

And while I’m not one to turn my nose up at cheap burgers and fries or chicken lo mein on the occasional busy weekday, this lack of variety was exactly why I was so pleased when preparation began on Mel’s Commissary and Luncheonette, which recently opened on West Main Street between Krave kava bar and the PTA Thrift Shop.

From the owners of Al’s Burger Shack in Chapel Hill, Mel’s serves as both a commissary for that restaurant and an eatery in and of itself.

When I first saw the light blue sign and matching picnic tables pop up in front of the building, I couldn’t wait for an opportunity to try it out, and I wasn’t disappointed.

I noticed the restaurant’s simple and slightly rustic vibe right away as I walked through the door. The four-top and two-top wooden tables, in combination with 7 or 8 bar stools, seat about 30 patrons inside. 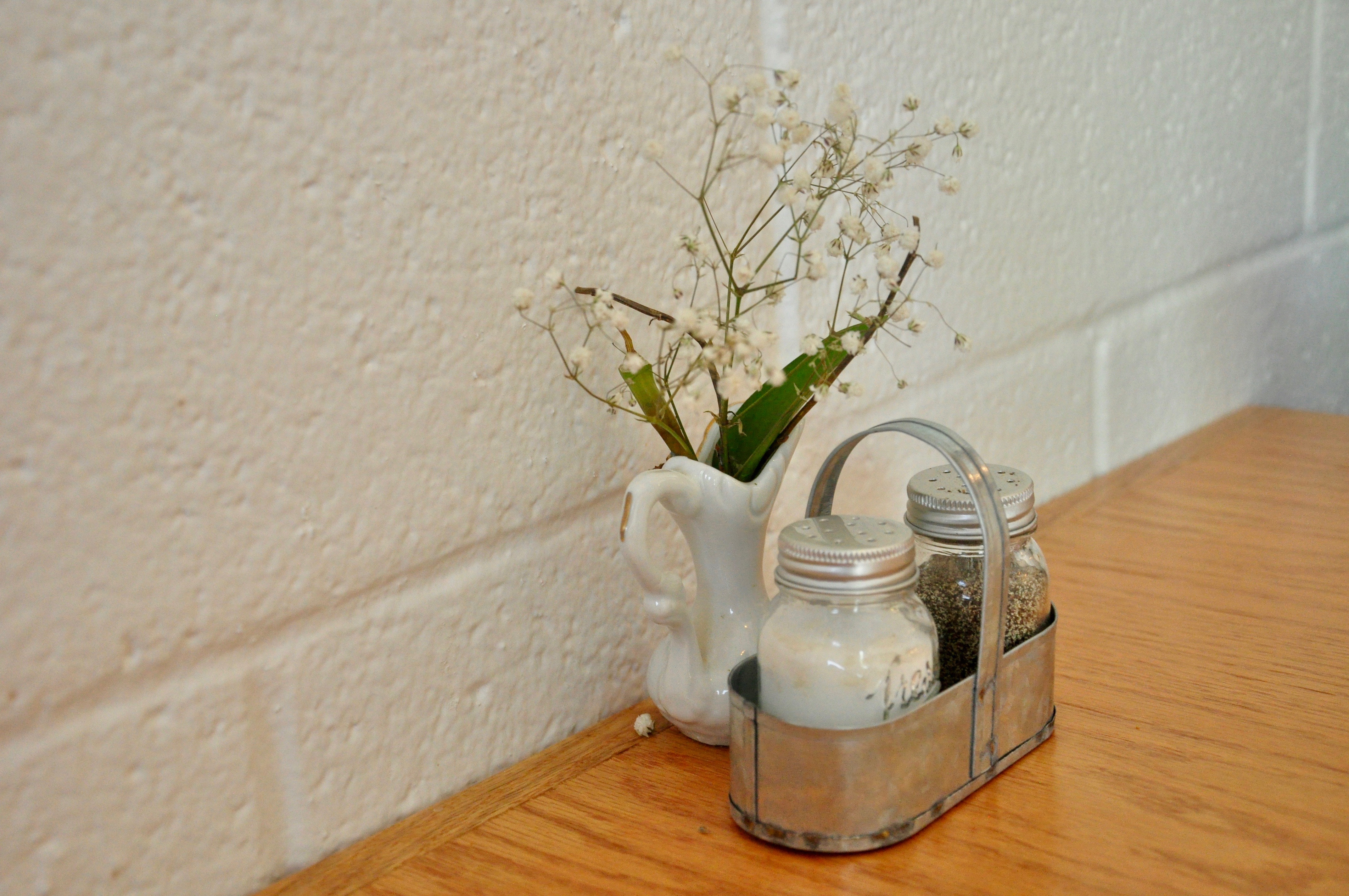 The salt and pepper shakers are held in little metal containers, and each table sports a small white vase with a sprig of white wildflowers.

Outside, large picnic tables offer additional seating. It was a hot, late-April day when I went, so I opted to sit happily inside near speakers playing songs such as Crosby, Stills, Nash & Young’s “Ohio,” Van Morrison’s “Into the Mystic” and the Allman Brothers Band’s cover of “One Way Out.”

When I asked about the music, I was told it was the Grateful Dead’s station on Pandora.

But before settling in, I ordered up at the counter from a chalkboard menu on the restaurant’s far wall.

The menu at Mel’s is transient; it changes from day to day and season to season. I actually appreciated that the menu was straightforward and only had about a dozen items on it, including sides and the dessert of the day.

When I placed my order, I was told I had managed to snag the last banana pudding available for the moment.

The menu items for the day I was there — including chicken tetrazzini, roasted vegetable rolatini, chicken and green chili soup, three varieties of sandwiches and three side options — were homey with a sophisticated twist.

My dining companion that day observed that while the food was relatively basic, it was obviously prepared by someone with great care and skill.

For diners looking for something hearty and filling, I would recommend the chicken tetrazzini, a casserole-like mix of noodles, mushrooms, cream, cheese and chicken. The creaminess of the sauce didn’t weigh down the other flavors in the dish. I felt full, but the food didn’t sit heavily in my stomach. 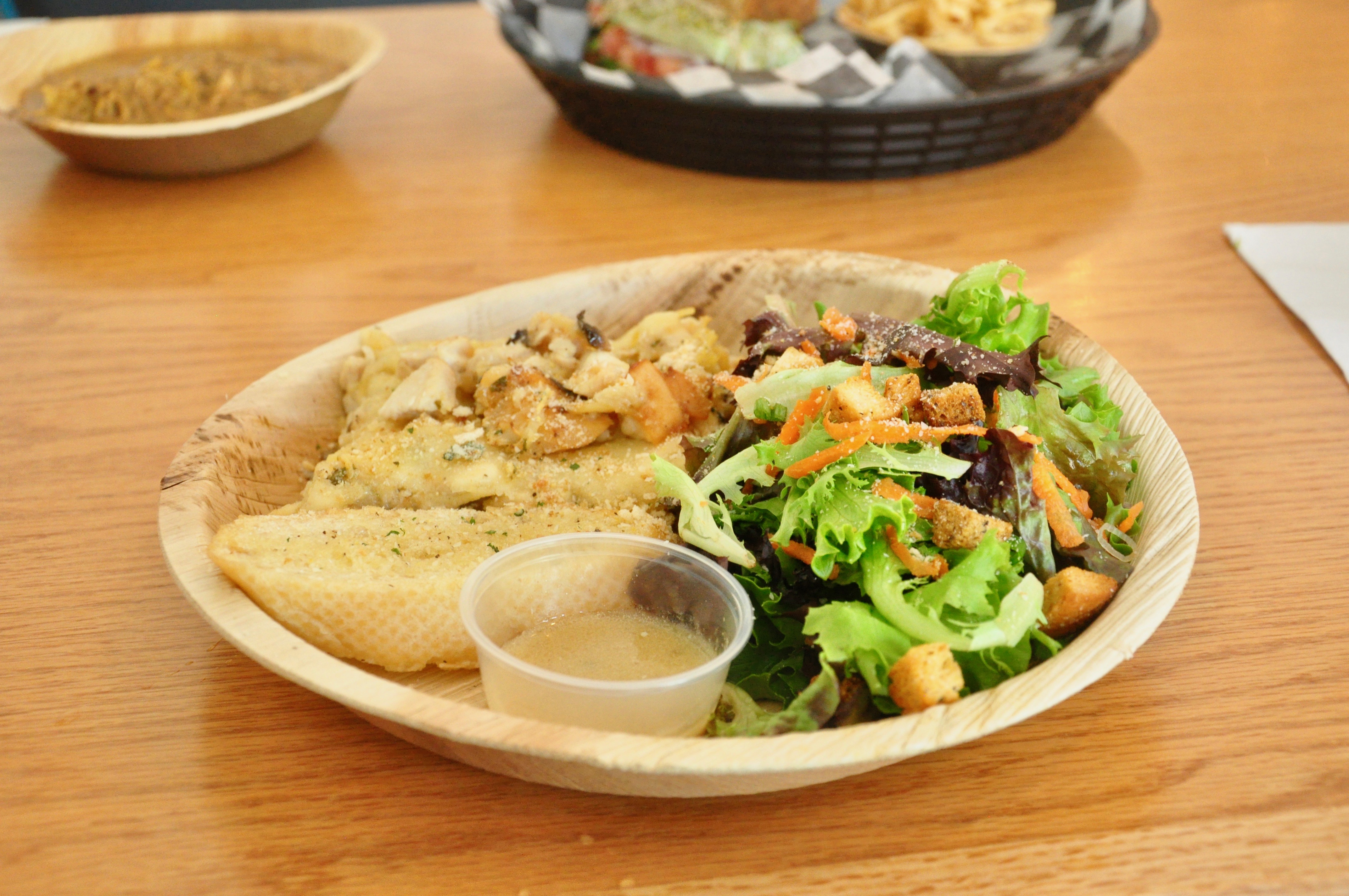 The entrees come with a side salad, which was a mix of greens with grated carrots, small croutons and a sprinkling of parmesan cheese. The oil and vinegar-based house dressing came on the side.

The chicken and green chili soup was also delicious. It contained shredded chicken, corn kernels, and a small piece of cornbread placed in the middle of the bowl. The green chili lended a perfect amount of spiciness.

The sandwich contained bean sprouts, lettuce, cucumber, tomato, onion and avocado. I’m not usually a big fan of sandwiches without a main protein, but this was on a different level — it was tasty and well textured.

The sandwiches came with a choice of one side. The options were asian noodles, broccoli salad and deviled eggs. I tried the asian noodles, because I was curious to taste something that seemed a bit out of place among the more traditional options. 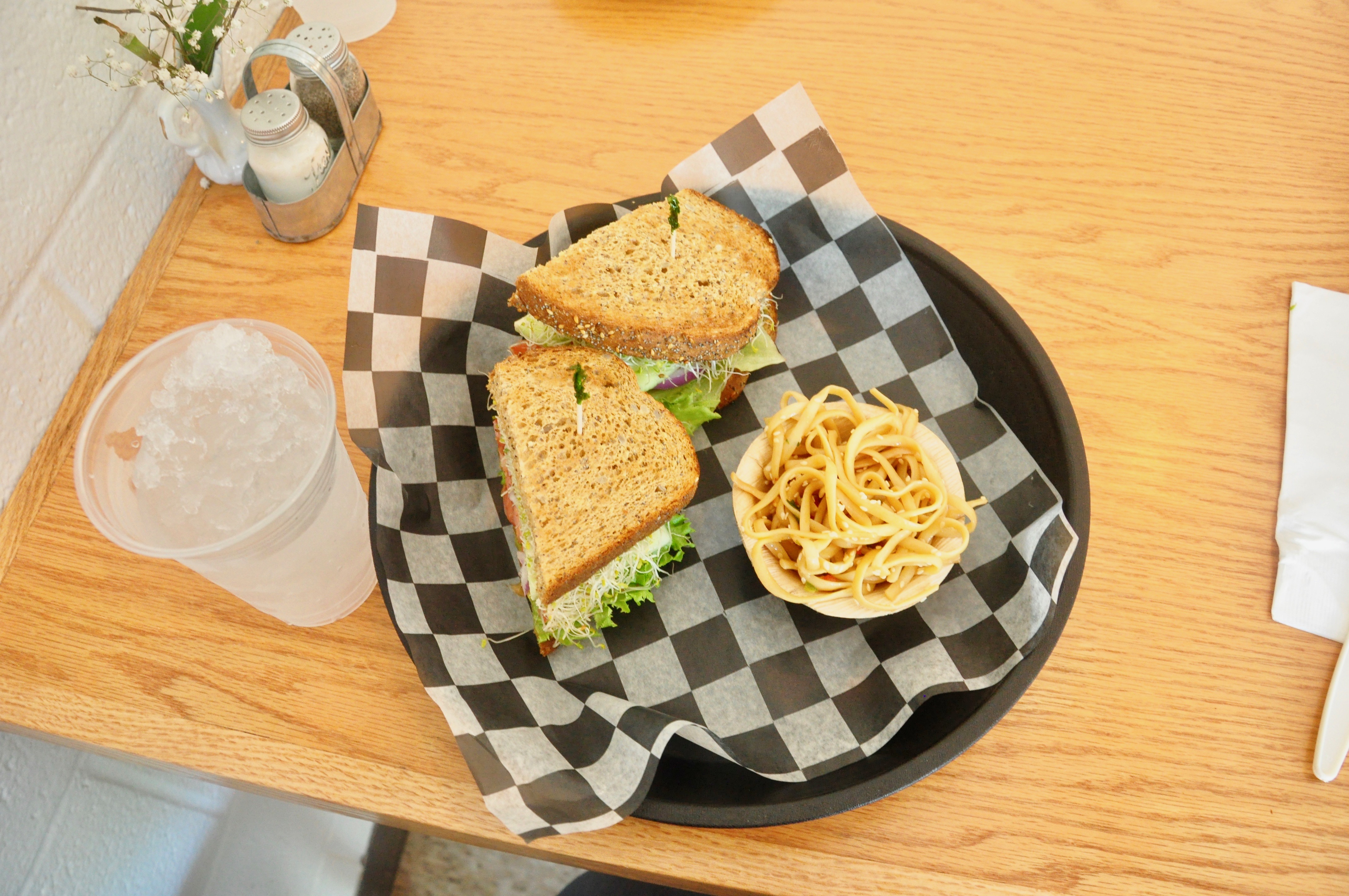 The noodles were served cold, with sesame seasoning, and were a refreshing addition to the sandwich.

Lastly, I devoured my banana pudding, which was everything I expect when I order banana pudding at a restaurant: large banana pieces mixed with creamy custard and topped with thick whipped cream. 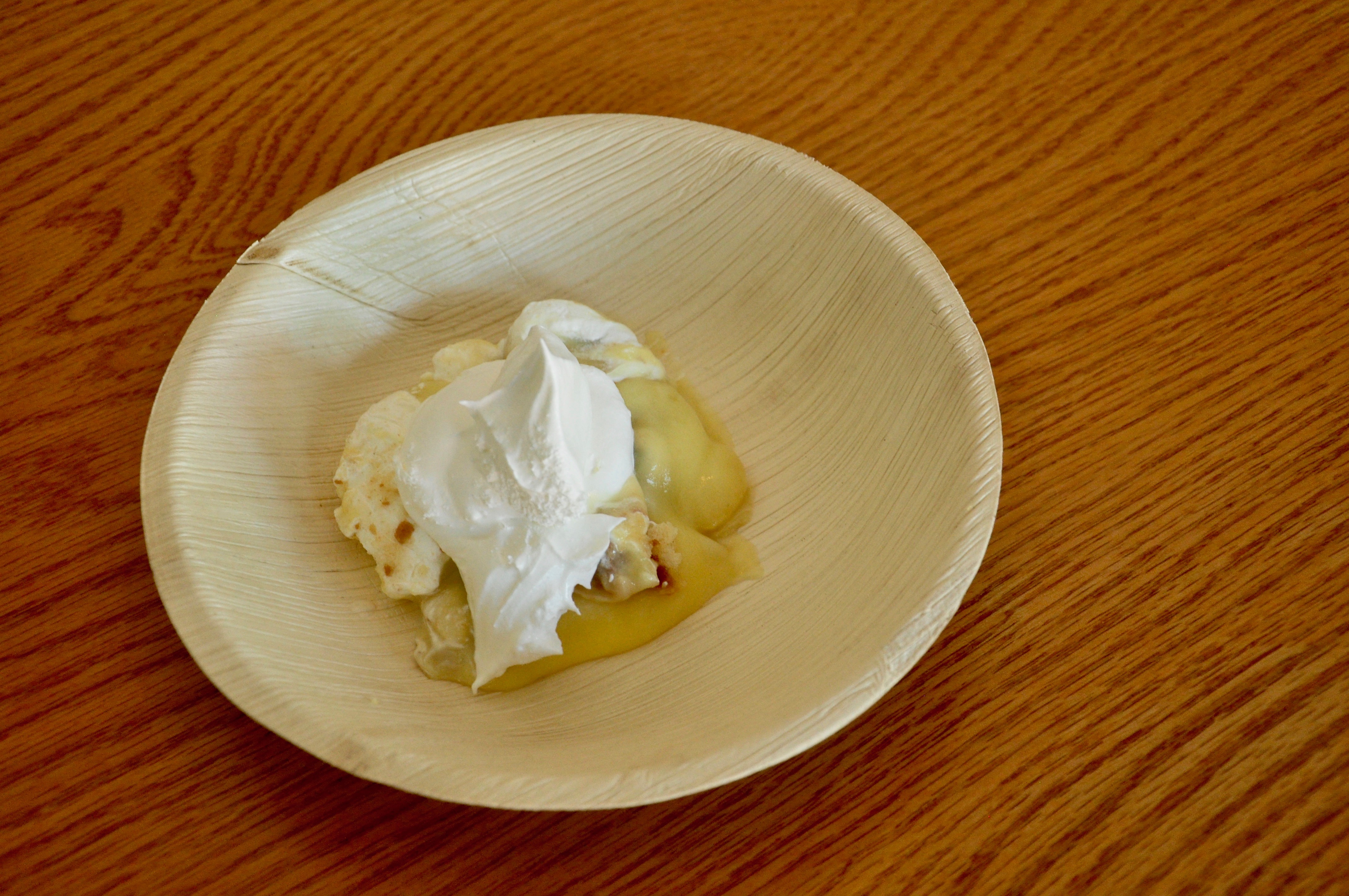 Paying a visit to Mel’s Commissary and Luncheonette is a little like going to lunch at a friend’s house, if your friend’s parent also happens to be an extremely skilled cook.

I was impressed with the reasonably priced homestyle meal I had at Mel’s, and I can’t wait to go back and try more of what they have to offer in their clean, bright, peaceful, no-frills environment.

Parking is located behind the restaurant and a little limited, but the location is within short walking distance from ample public parking in downtown Carrboro. 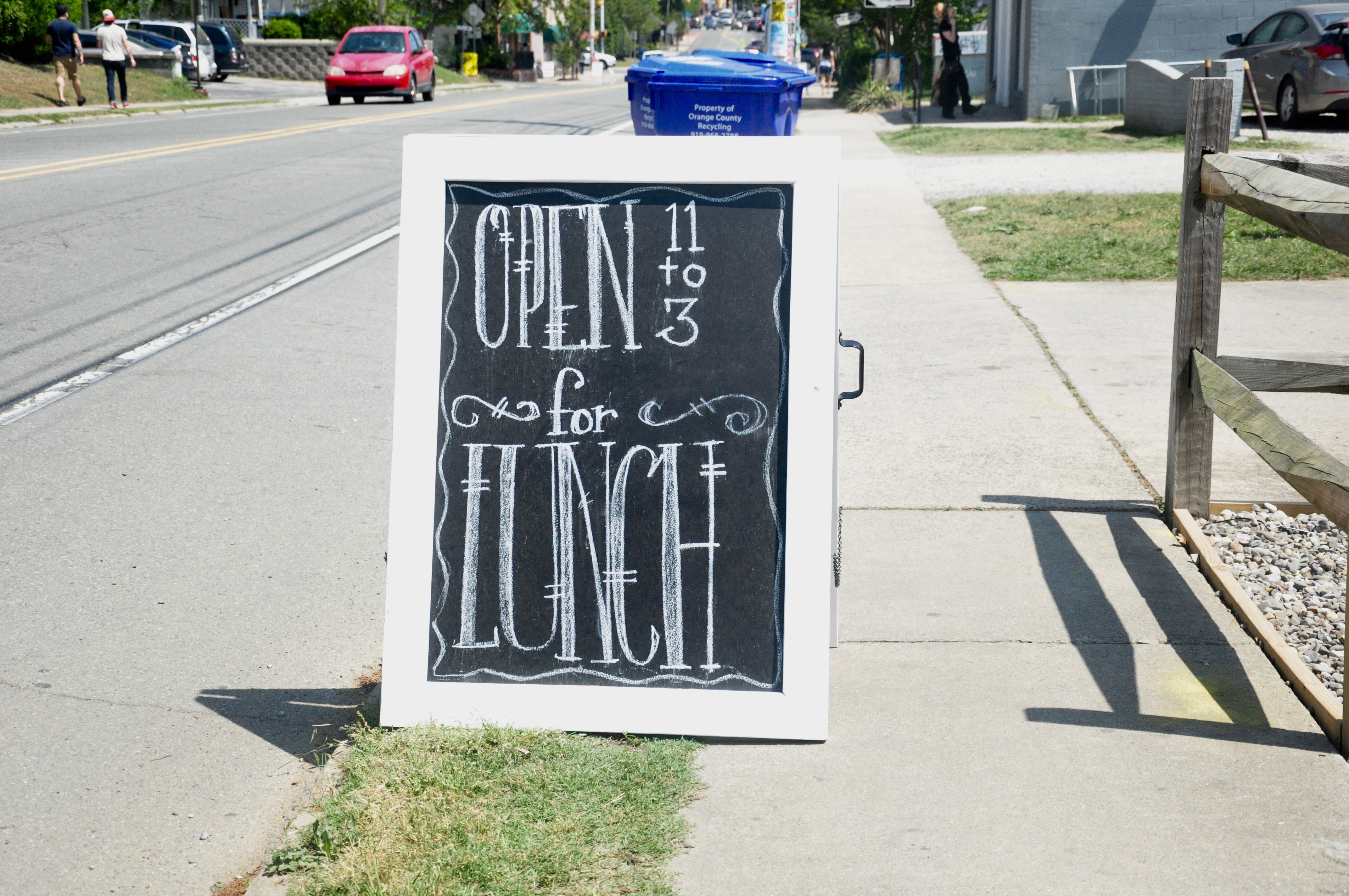