School districts in Orange County have a funding problem.

A recently passed bond of over $100 million should provide some relief, but it will not be enough.

Both Orange County Schools and Chapel Hill-Carrboro City Schools receive their yearly funding from the Orange County Board of Commissioners. They also receive state lottery money — $528,000 and $828,000 per year, respectively.

That money is useful for completing smaller projects but is nowhere near sufficient for all the improvements that need to be made.

If you are an Orange County resident who voted in the most recent election, you might remember ticking a box in support of a bond that would provide funding for public schools.

The bond money will be split between the two districts, with about $50 million going to Orange County schools and $70 million allocated to Chapel Hill-Carrboro City Schools. The money was allotted according to the number of students in each district. 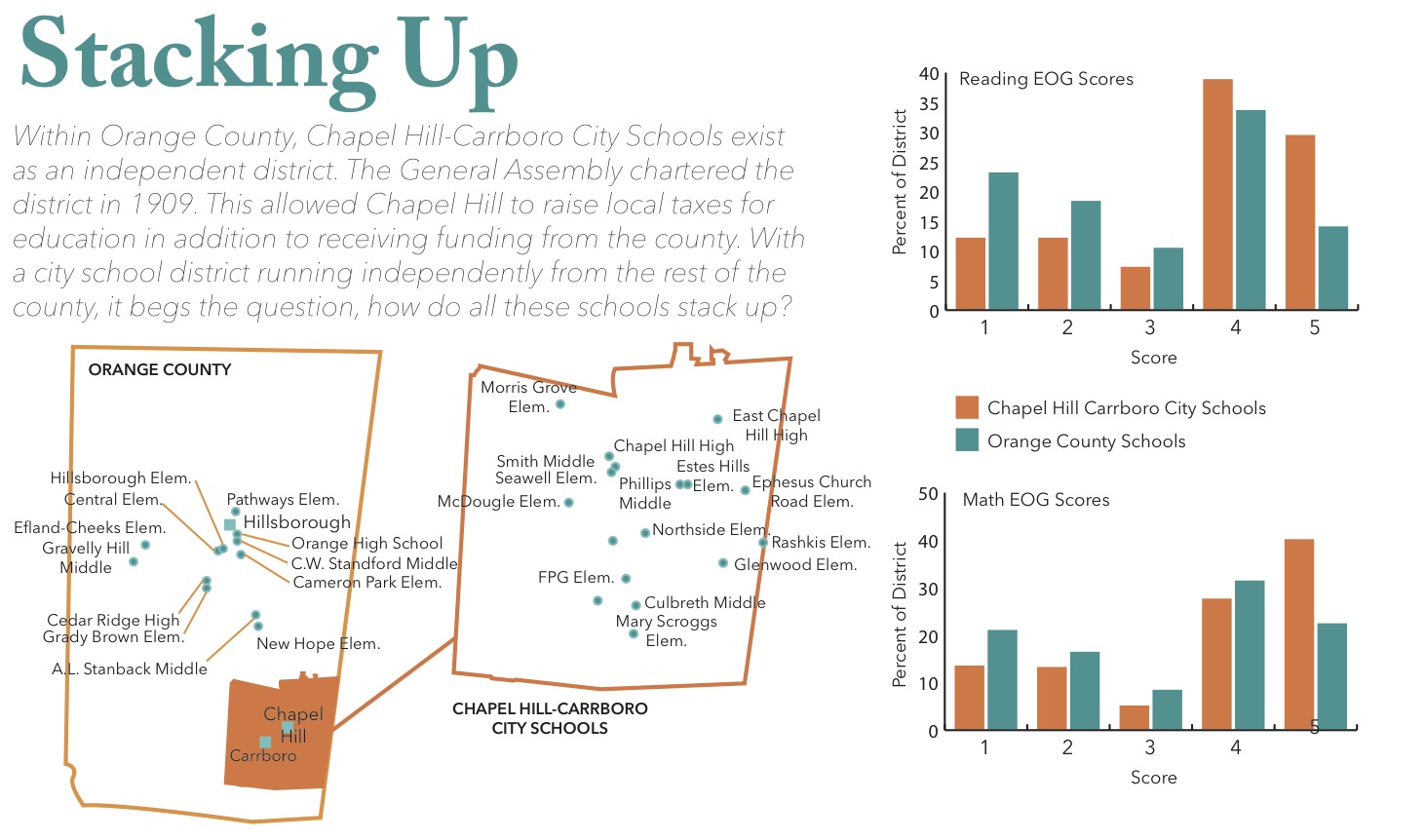 Now the time has come to put that money to use. There are several projects that district officials hope to jump start with the funding, the most major of which will be considerable reconstruction work on Chapel Hill High School, the oldest high school in its district.

“About $50 million of that 70, roughly, is for the renovations at Chapel Hill High School, a school that was built in 1966,” said Jeff Nash, spokesperson for Chapel Hill-Carrboro City Schools.

“It’s been needing renovations for a long, long time.”

Other projects include giving the near-capacity Cedar Ridge High School, located in the Orange County school district, a new classroom wing that will allow for 500 more students.

Funding for infrastructure replacements, various updates across the district and renovations at the Lincoln Center will also come from the bond money.

The biggest change on the campus will be the addition of a new pre-kindergarten program, which will be housed in the bottom floor of the center. The administrative offices will then be moved to a yet-to-be-built second story of the complex.

Finally, funds will be used to build a more sustainable transportation and maintenance center to service buses for both school districts.

The timeline for all of these projects is not concrete, but Nash said he is hopeful that construction on the Lincoln Center will begin by September, with renovations at Chapel Hill High School beginning soon after.

Though the list of projects being tackled under the bond is long, $120 million is in fact not nearly enough to address all of the district’s infrastructure problems.

“There’s a capital investment plan that has three phases, and there are about 10 buildings that need a lot of work. This bond takes care of a couple of them, but we’ll need another bond soon to go to the next phase, which has four schools in it that would need renovations,” Nash said.

Lisa Kaylie, CHCCS Parent Teacher Association Council president, is concerned the funds will not be sufficient.

“The CHCCS PTA Council wishes there had been enough funding in the bond to address capital improvement needs of each individual school in the district,” she said.

“There is a long-term plan to address all of those needs in phases, and we hope that all phases of the plan will be implemented as soon as possible.”

Some parents have expressed frustration that urgent needs in their particular schools are not being addressed in this first phase.

“I think parents who have been informed about the prioritization process are satisfied,” Martine said.

“(CHCCS Assistant Superintendent) Todd LoFrese presented a detailed list of current and future needs for each facility to the PTA Council and explained the rationale for which projects go into Phase I, Phase II and Phase III.”

Since Phases II and III have not yet been funded, PTAs will be paying a lot of attention to the county commissioners’ voting records to ensure that people elected make education a priority, Martine said.

“High quality schools drive property tax revenue, which funds all other social services that are so important to our community,” she said.

“Chatham and Wake counties have lower housing prices and are improving their schools, and it feels like Chapel-Hill Carrboro is resting on its laurels.”

Two Languages, Two Cultures
Infographic: How the Schools Stack Up