A typical elementary school education in the United States is composed of reading, writing, math and maybe some art or music.

But what about adding computer science to the mix?

Over the past three years, Cari Ann Brick has been introducing elementary and middle school students to computer science and, more specifically, coding.

“I kind of start from the ground up with my kids,” Brick said.

“What I’ve found is that I can teach anyone from kindergarteners to all the way up to adults to do it.”

Brick is a media specialist at Bonlee School, a kindergarten through eighth-grade school in Chatham County, North Carolina.

She began exploring computer science education by hosting an Hour of Code event at Bonlee School in 2013. Hour of Code involves introductory coding activities created by Code.org, a nonprofit organization that teaches coding.

“I’m kind of like a tech junkie, and so I’m a little bit self-taught. I found the Code.org program, and I was passionate about it, and it’s kind of just taken off,” Brick said.

Brick continues to host Hour of Code at the school’s media center every December but also meets with classes throughout the year to hold coding sessions.

Although she is not always able to teach kids directly, Brick has made resources for learning how to code available on the Bonlee School website’s media center page.

“It’s really awesome — especially with the younger kids — that they ask me to code,” Brick said.

Bonlee has found that younger students are able to catch on to the concepts of coding quickly.

“With my little kids, like my kindergartners, you’d be surprised; it’s amazing to see the lightbulb go off in their head when they get a concept,” Brick said.

“Like, they know what an algorithm is after I talk with them.”

In addition to giving coding lessons through Code.org, Brick provides other opportunities for kids to explore coding and its uses.

For example, she allows them to interact with a Sphero Robotic Ball, which has programmable movement.

Brick hopes her efforts to teach coding will spread to other schools. This past summer, she taught a coding course at the Chatham County Technology Conference, which was attended by teachers and educational faculty from throughout the county.

“That’s my goal — to kind of spread word of (computer science learning) just to give these kids an opportunity to know computer science-related jobs are out there and that much of what we touch is code,” Brick said.

“Like, our cars are coded; something like an elevator — you gotta tell it what to do. How does that elevator know to go to the first, second, third floor? You have to code.”

Kris Jordan, a computer science lecturer at the University of North Carolina at Chapel Hill, said there are benefits to learning how to code at a young age.

“Many of the fundamental ideas behind programming are the same no matter what language you use. The earlier a student has exposure to them, the longer the ideas have to blossom,” Jordan said. 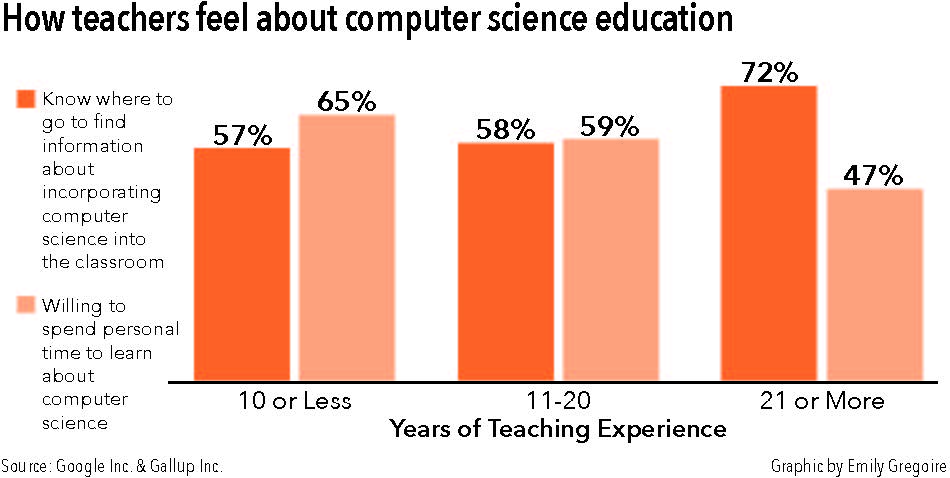 “The biggest push for us to update our computer science courses has been over the past year,” Kelly Batten, executive director of secondary instruction and career and technical education in Chatham County, said.

Part of the district’s motivation comes from the growing need for computer science-related skills in the job market.

“One question we ask ourselves is, where do we want students to end up?” Batten said.

“The job market out there and growing is related to coding.”

Jordan commented on the increasing value of coding skills in modern day society.

“Programming skill, or more generally the ability to think computationally, is more valuable today than ever before, and this is driven largely by the amount of data we’re gathering in every field,” Jordan said.

“We have more data than humans could ever analyze. Employing machines to help us sift through data and find insights is where new discoveries are being made.”

Batten said that one benefit of the new course is its appeal to a diverse population of students.

“One of the impetuses of Code.org is for everyone and anybody to be able to learn how to code,” Batten said.

The research released by Google and Gallup found that female students are less likely to be encouraged to pursue coding by parents, teachers and the media than their male counterparts.

Additionally, minority students are less likely to have access to computer science education, despite, on average, displaying a higher level of interest in the subject than white students.

According to the Code.org website, 45 percent of its students are female. Just under half of the students are underrepresented minorities.

In the future, Brick said she hopes that some of the students she introduced to coding will have been influenced by what she showed them.

“I’m passionate about it, so I hope that they feed off of (that passion) and get a more global perspective of the world and that they look at things a little bit differently,” she said. “Not necessarily that they’re going into that field but that they’re looking at things differently.”

Obey Creek: Where are we now?
One Meal at a Time