Last week, the Valentines bought about a dozen boxes of chocolate from the store and plan to give them as gifts for their nurses and doctors.

“Some of them have eaten it, and some have not, but they said, ‘If it is from Southern Season, it will be good,’” Martha Valentine said.

Joseph Valentine, recalling that he first came to the store in 2003, said they have always been big fans.

Founded in 1975 and located at University Place in Chapel Hill, the store is a premier destination for many Triangle residents to buy gifts and specialty foods.

From offering cheese samplings along its shelves to providing cooking classes in its kitchen, the store is known for gourmet items, including cheese straws, chocolate truffles, wines, beers and a variety of bakery and packaged food.

But a few months ago, the store’s financial situation came to a head, having rapidly worsened due to fast expansions in Virginia and South Carolina. On June 24, it declared Chapter 11 bankruptcy protection, frequently referred as “reorganization” bankruptcy that keeps the business alive and pays the creditors over time, listing $18.3 million in liabilities and $9.8 million in assets.

Calvert has somewhat of a track record in turning around bankrupt gourmet food companies. It bought Kitchen & Company in 1999 for $3.3 million in a bankruptcy proceeding. 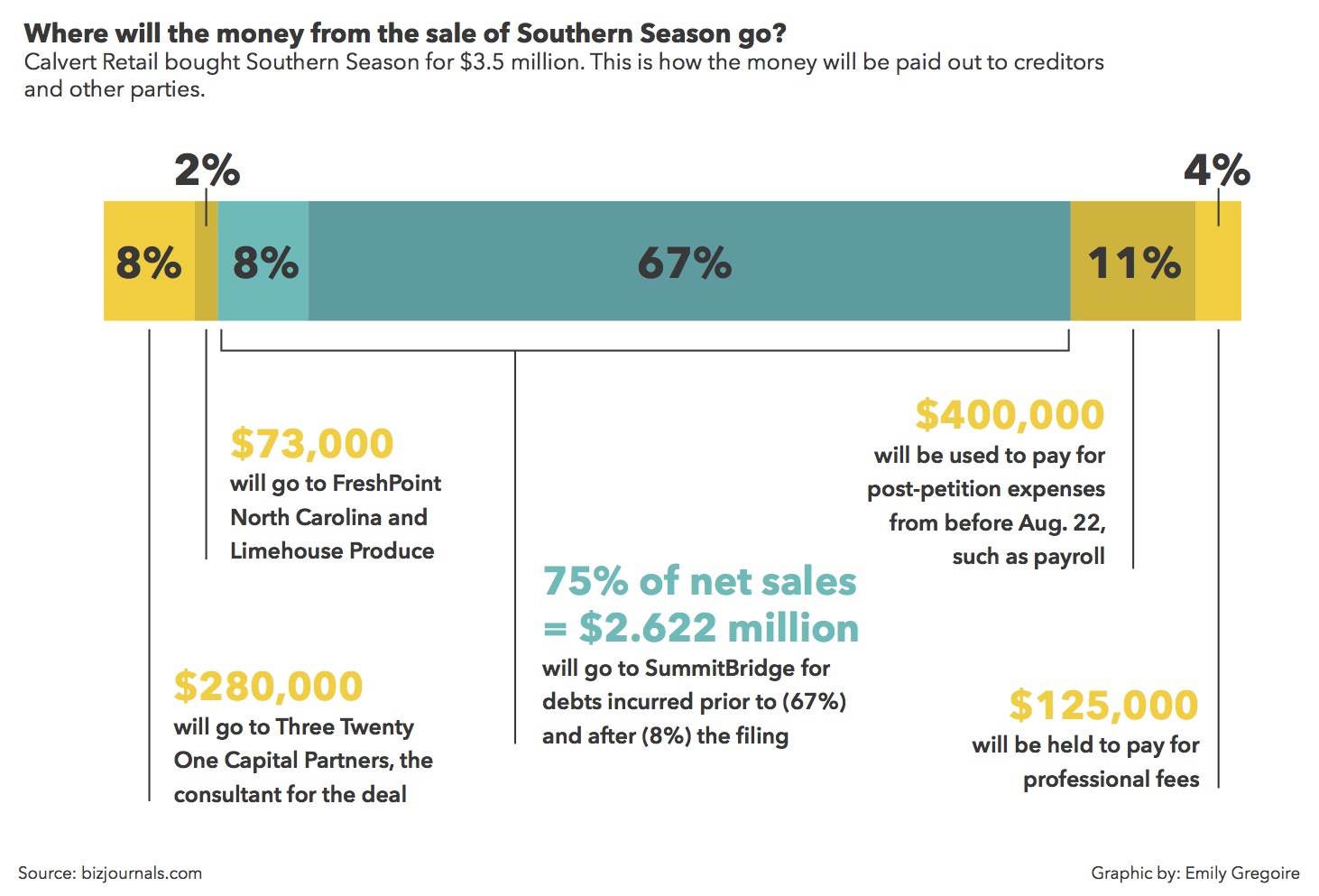 Calvert Retail owner Eric Brinsfield said though there have not been many concrete changes at Southern Season yet, the store’s financial situation is better after the acquisition.

“The business is now better capitalized. It means they have more money to buy products,” he said. “That’s really the biggest change. It’s just that we are buying more products.”

But customers say they have noticed some minor changes.

“There were several different shelves of chocolate, and now they have taken them out,” Joseph Valentine said.

Shopping at the store for her daughter’s birthday, Donna Bergholz, a Chapel Hill resident, said she could not find the birthday cake that she’s bought in past years.

A reduction in the number of products offered might come down in part to small businesses’ disappointment with Southern Season’s former management, as many of them are still waiting for debts to be paid.

“There are people who are very upset about the company going out of business. And they are reluctant to start selling products to the new business, even though we are an entirely new company that has been in retail for many years,” Brinsfield said.

“We haven’t gotten any money back yet. We are still waiting on the bankruptcy proceedings,” said Michael Lloyd, owner of Num Num Sauce, a Durham-based condiment company that started doing business with Southern Season in 2011 and is owed $2,113.

He said Southern Season’s orders only constitute a small percentage of his business, but his company, as a small business, needs the money for paying the bills.

“The good thing is that there are other opportunities from being in Southern Season,” Lloyd said, noting the exposure at Southern Season has brought orders from overseas buyers to his company’s products.

“We would like to keep doing business with Southern Season,” he said.

Brinsfield also expressed an eagerness to maintain relationships with the local speciality food business community, noting that strong traditions are what attracted him to Southern Season.

“Those people are the reason why we sell so many interesting speciality products,” he said. “When small companies launch products, oftentimes they launch them here with Southern Season.”

“We are actually sort of bringing back products that Southern Season may have had in the past but stopped carrying,” he said.

Looking forward, one key issue is how Southern Season will position itself in terms of striking a balance between high quality and affordability. Although the store is located in the heart of a college town, its customers tend to be more well-off, established residents instead of students. For some, the store is a little bit too pricey.

“It became, in my opinion, sort of a show room. People came here to look at things, but I don’t know if they bought a lot. I don’t believe they did,” Joseph Valentine said, adding that he believes many products in the store are too expensive.

“I think the store would be wise to diversify things a little and make it a little more accessible to more people at different time when the economy is not so good.”

But Brinsfield said he does not think the price is too big a problem, noting the financial health of the Chapel Hill store has always been good.

“This store was not a problem. The problem was when they expanded. This store has always been healthy,” he said.

Other customers noted the surrounding area has a number of high-income residents who can afford to pay for pricey items.

“This is an expensive store. But there are a lot of people in this area who can afford to shop here,” customer Kathleen Browning said, carrying a bag of herbal tea, popcorn and cheese straws.

“There is a market for everything. These are speciality items, and they are going to cost more. There is no way to get around that.”

Brinsfield made it clear that he plans to diversify the product offering to attract a broader group of customers, though he declined to say what specific changes he will make.

“Over the next year, I think there will be some enhancements, additions to the product mix that may be of a broader reach to more people,” he said.

In the end, loyal customers are simply happy about the fact the store is still here in Chapel Hill.

Recalling the first time she visited the store in 2010, Browning said, “When we were shopping for houses down here, my realtor said, ‘You have to go to Southern Season because it’s a fantastic store.’ And we came, and she is right. This is fantastic.”