At Frank Porter Graham Elementary, the welcome sign outside of the Chapel Hill-based school is in Spanish — because the school’s kindergarten students are more likely to be speaking Spanish than English.

“I spent some time in the classroom with my kids when they were younger, and it was amazing to see the teachers speaking Spanish and see the kids nodding, following the rules and speaking Spanish,” said Tracy Wesley, a parent who has a son in first grade and daughter in second grade in Frank Porter Graham’s dual language program.

“It’s amazing to see how quickly the kids can pick it up.”

Frank Porter Graham is in its second year as a dual language magnet school, where incoming kindergarten students across the Chapel Hill-Carrboro School District must apply through an open lottery system to be admitted. Its dual language program, which groups English speakers with Spanish speakers, is one of 94 dual language programs in North Carolina — and parents and education experts alike are encouraging further expansion.

Still, programs are facing an upward battle with regards to state funding, and, at times, students struggle to focus on speaking their second language.

Ochoa said in order to prepare for Spanish literacy, the students start reading in Spanish in kindergarten, first grade and second grade, where they learn pronunciation and phonetics. In third grade, they start formal English reading, but by this point, the kids have learned how to read in English.

When Ochoa asks the students questions in her math classes, a majority of the class’ hands shoot up. The native English speakers follow her directions without hesitation and enthusiastically repeat Spanish words — even math terms. They are, after all, at least partially immersed in the language.

The cabinets are lined with posters of English-to-Spanish translations of words such as “data” and “line plots.” When the students gather in front of the Smart Board, they sit on a rug labeled with pictures and accompanying Spanish words. El libre: book. La escuela: home. La flor: flower.

By fifth grade, the children are expected to be proficient in Spanish and English, which means meeting district requirements. The program continues through middle school, as Culbreth Middle School in Chapel Hill also offers dual language studies. 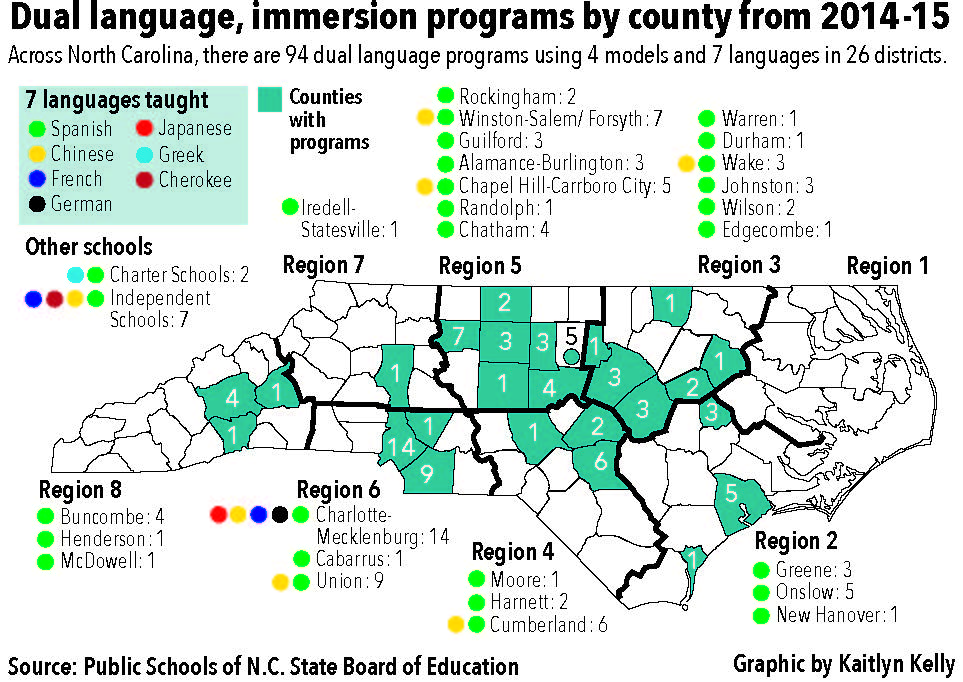 Ochoa said the most difficult part of teaching in her dual language classes is encouraging native English speakers to speak Spanish.

“Sometimes they like (speaking Spanish) and feel proud of what they can do, but sometimes they speak English the whole day,” she said. “Making them speak Spanish is a bit hard.”

At times, the students mix languages, either sneaking in a few English words into a response or asking Ochoa questions completely in English.

Mental confusion can certainly arise when students are learning in two languages.

But Elaine Watson-Grant, coordinator of dual language in Chapel Hill-Carrboro Schools, said although kindergarteners are overwhelmed in the first two months while processing academic content in two languages, they don’t get confused between the two languages.

“Their brain is extremely plastic at that age,” she said. “The more you put in, the more you develop those neurons — the programs capitalize on a natural physiological process.”

Wesley said her daughter was a bit overwhelmed and tired by speaking a different language, but overall, the program helped expand her cultural awareness.

“I was wondering how it was going to be like with most of my daughter’s day in Spanish, but her only complaint was that the days were really long,” Wesley said.

An article in Education Week cites the example of Collinswood Language Academy in Charlotte to shed light on how dual language programs are responsible for the school’s across-the-board high test scores from students in every category: low-income, English-language learners, Hispanic, African-American, white and those in special education.

About 80 percent of students at Glenwood Elementary scored at or above grade level on their end-of-grade exams in 2014, according to N.C. School Report Cards.

But at Frank Porter Graham, about 50 percent of students scored at or above grade level on their end-of-grade and end-of-course exams in 2014. Researchers Wayne Thomas and Virginia Collier attribute this disparity in test scores between dual language schools to a difference in socioeconomic backgrounds, as well as to the number of students with limited English proficiency.

At Frank Porter Graham, 47 percent of students received free or reduced lunch, a measure of poverty, and about half of the students are native Spanish speakers.

Watson-Grant said at the state level, there needs to be new assessment policies, in which children in the dual language programs are assessed differently than those not in the programs.

“This will give these students a competitive edge in the college application process, as well as the job market,” she said.

The first cohort of Glenwood Elementary’s Mandarin dual language program is graduating high school this year, with students going to colleges such as Stanford, Massachusetts Institute of Technology and UNC-Chapel Hill. According to Randby, these students say their experience in the program was definitely beneficial. 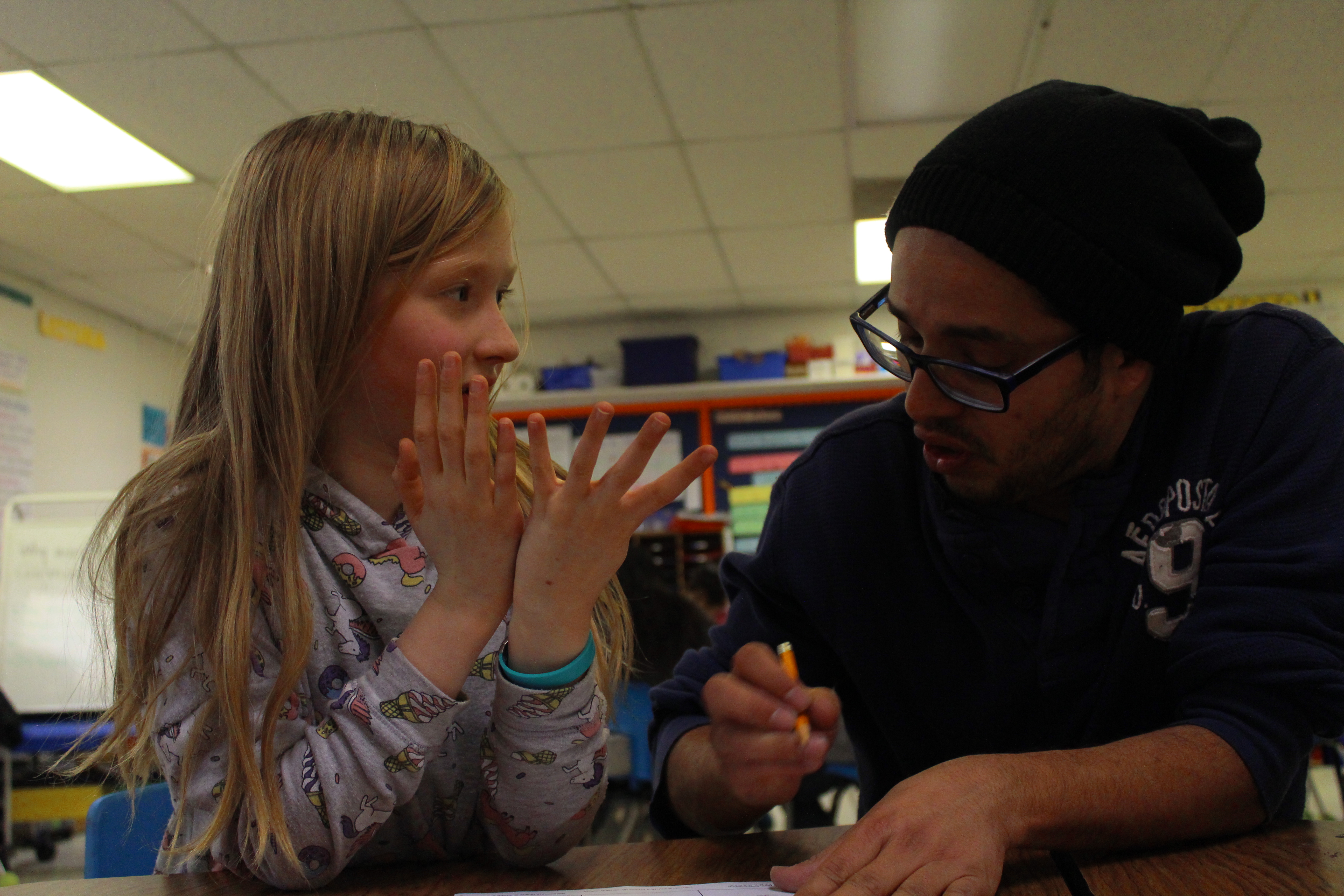 Matt Ellinwood, policy analyst for the N.C. Justice Center, said despite the strong research supporting the success of dual language programs, they often have a limited budget, so there is a shortage of textbook and instructional materials.

For example, at Glenwood Elementary, there are not resources available to provide math instruction in Mandarin because purchasing these large-scale materials from China is difficult, Randby said.

“The state is heavily involved in the research and does support dual language programs; however, the districts are independently carrying the work forward,” Watson-Grant said.

She said, ideally, all schools with dual language programs would be converted to magnet schools.

In the case of Frank Porter Graham, incoming kindergarteners apply to Chapel Hill-Carrboro’s dual language program and then are assigned to a school based on where they live.

“When a school is a complete magnet like Frank Porter Graham, the situation is ideal because teachers can plan together with different grade levels and everyone is geared towards the program with no competing interests,” she said.

But there is a lot to consider, such as traditional school districts needing to be redistricted, an increased need for bilingual teachers and additional funding, Watson-Grant said.

“One unique experience we have as a family is this cultural experience and foundation,” she said.

“I feel like you can teach people to be more culturally aware and what not, but these kids are really living it.”