A berry good season, despite weather

When the going gets tough, the strawberries get growing. This year, North Carolina berry farmers saw freezing temperatures and rainy day after rainy day. Nevertheless, the crops persisted.

“The weather has kept us on our toes,” said Chas Edens, director of Anathoth Community Farm & Garden in Cedar Grove. Anathoth grows produce and shares it through the Community Supported Agriculture model. Working as a nonprofit, they grow and distribute 180 boxes of produce to several drop-off locations in the area.

This year, they had even more work on their hands. When nearby farm Whitted Bowers took a sabbatical to update their gardens and orchards, Anathoth took over their blueberries, growing and maintaining them to be placed in the produce boxes.

The farm expects a 50 percent harvest of blueberries this season, and they aren’t the only ones who have struggled this year. Edens said their neighbors’ irrigation system for the blueberries froze and didn’t work. And it didn’t help the blueberries or the strawberries when the area got seven inches of rain in 72 hours.

“We had those three rainy days,” said Jennifer Brooks, owner of Brooks’ Farm in Timberlake, about her own crop of strawberries. “That much rain? It’s gonna rot ’em.”

Brooks said last year they had too much rain, too. In peak season, they lost over half their crop of strawberries. Farmers can cover the strawberries, but they cannot control the weather.

“Take it as it comes, grin, bear it and keep on getting it,” Brooks said.

John Soehner of Eco Farm in Chapel Hill decided to take the good with the bad when the rain rotted his strawberries.

“It may be bad for the strawberries but it helped a lot of other things,” he said.

The rain made Eco Farm’s greens, like arugula and swiss chard, fresh and leafy — and it made the farmers work extra hard for those berries. 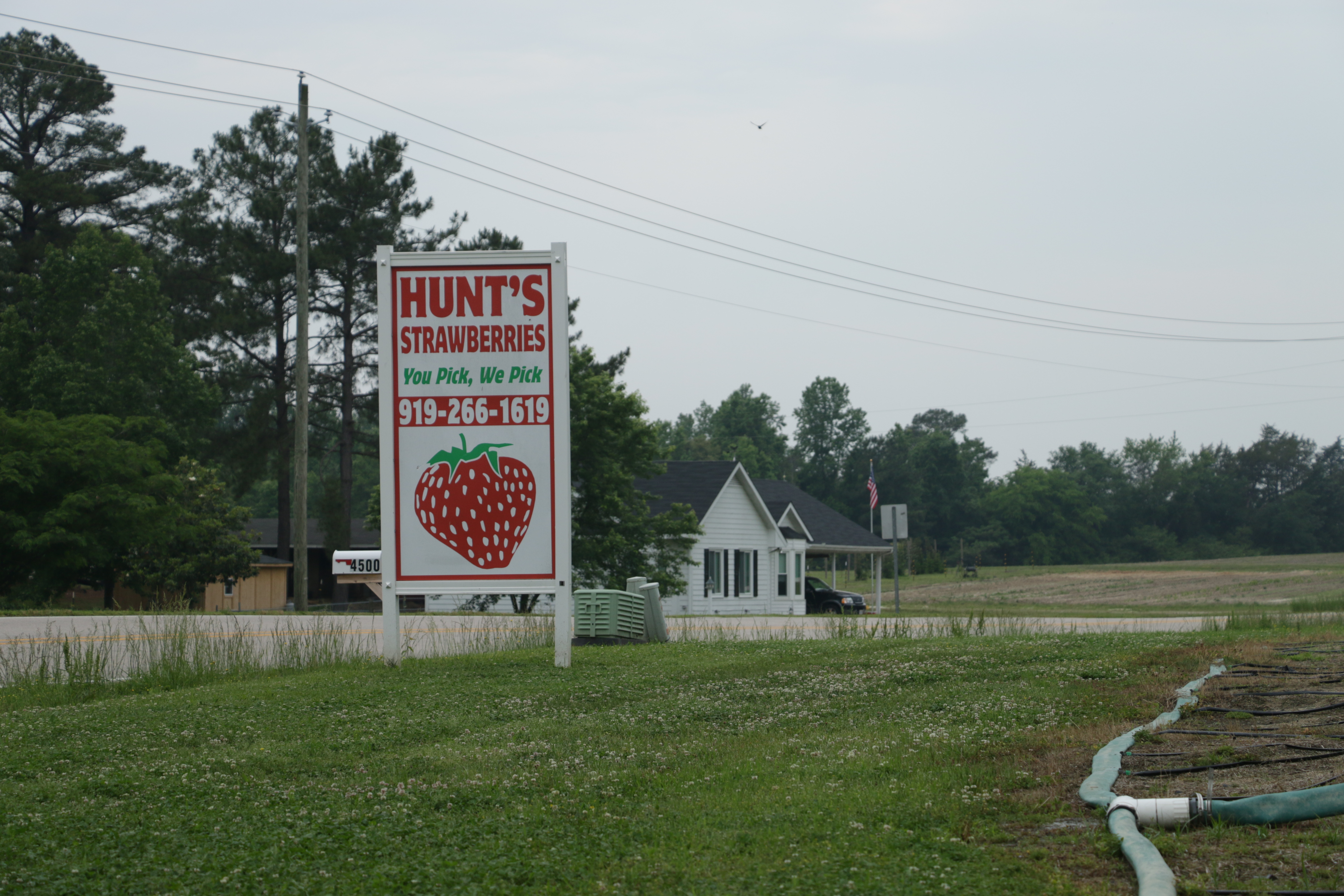 The Hunt family is no stranger to hard work. They opened Hunt’s Strawberry Farm in 1970 in Knightdale and now have a three-generation legacy of providing sweet strawberries and good memories to families around the state.

The farm consists of 5.12 acres and about 58,000 strawberry plants. While they grow blackberries, peaches and figs for personal use, they only sell strawberries.

“We do it to provide family fun and nutrition,” Arnella Hunt, current owner of the farm, said. “It’s hard to make a living off farming anymore.”

And it’s been especially hard to grow strawberries this year. Hunt said they had about 12 consecutive days of cold weather. When it gets chilly, they cover the strawberry plants and hope for the best — until it drops below 30 degrees Fahrenheit.

That’s when the Hunts get down to business.

Strawberries can survive at freezing temperature, 32 degrees, but they won’t make it if they get colder than that. To keep them hanging on, farmers douse the blooms and berries in water using the sprinkler system and let that freeze over, giving the strawberries a protective sheet of ice.

“We drained our pond almost to its entirety,” Hunt said.

When they ran dangerously low on water, their neighbors offered their own pond water to pump into the irrigation system. They needed to empty their pond for landscaping purposes and the Hunts needed water.

But even with the extra water, their problems did not vanish. If it got too cold, sprinkler heads would freeze over, and then the farmers would need to be out there at night banging the sprinklers with a pipe wrench until the ice broke loose.

“It was a lot of long, cold nights,” Hunt said. Without continual water, the berries would lose their protective sheet of ice, shrivel up and die. Many nights, the family would be out among the strawberry plants fixing the sprinklers to make sure the strawberries stayed frozen.

“That’s the difference between us and people in our perimeter,” Hunt said. “You can’t just say, ‘Oh, whatever, it’s too cold.’”

Hunt made it clear that perseverance is a trait not just of berry farmers, but of strawberries themselves. 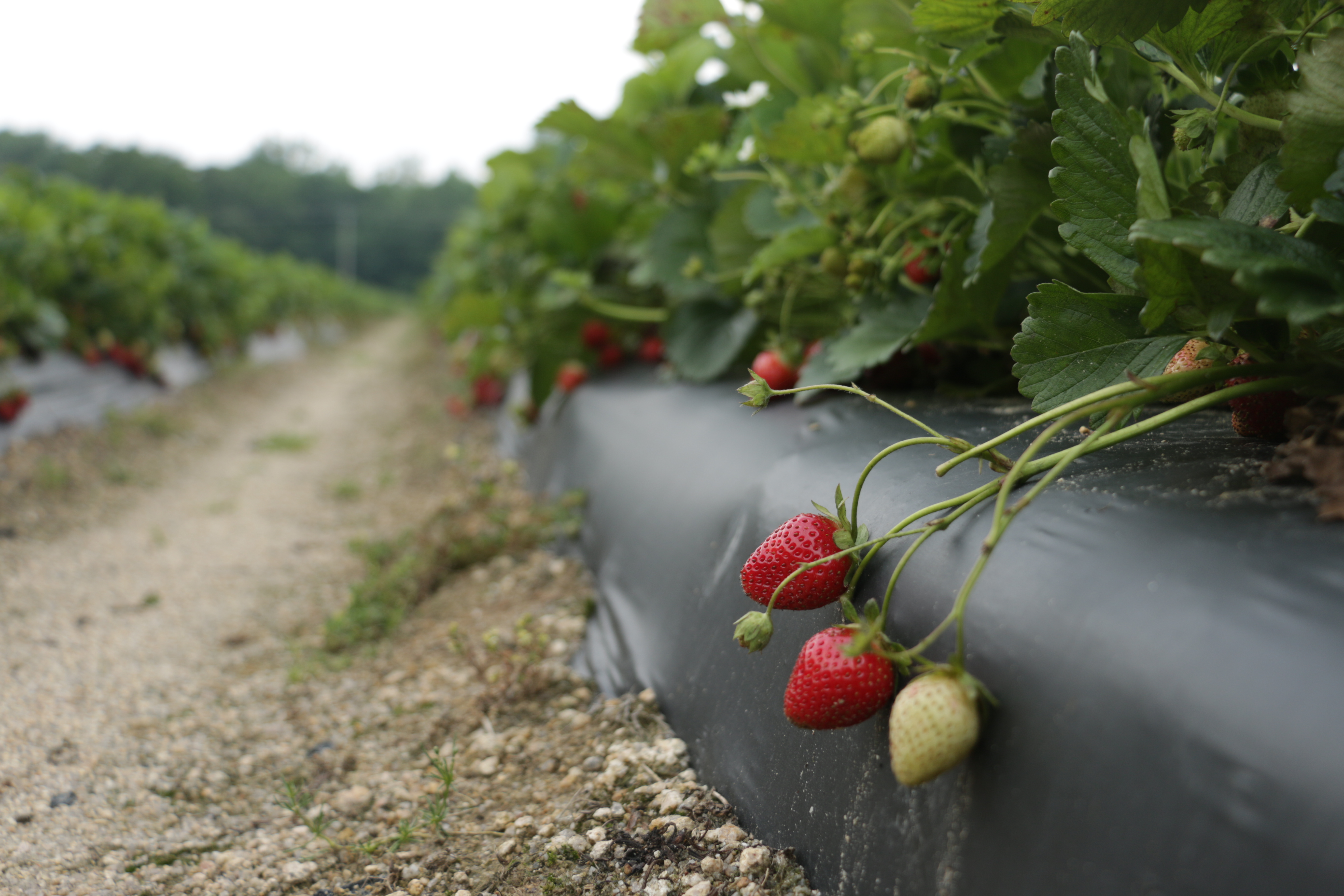 Over at Anathoth Community Garden & Farm, the strawberries survived the weather and ripened for the harvest.

“They bounced back and they’re doing pretty good,” Edens said.

All across the state, berry lovers came together to share a love of strawberries at events like the Strawberry Jamboree at the Carrboro Farmers’ Market and the Strawberry Dessert Contest at the State Farmers Market in Raleigh.

“I felt like Oz ’cause I was granting wishes,” Hunt said, describing how it feels watching kids fill up buckets with delicious red berries.

Going berry picking lets people have interactions they never would have had otherwise, and it lets people make memories they couldn’t make anywhere else.

“After you lose someone, the memories are all you have,” Hunt added. She lost her father during strawberry season, and working out among the plants was like therapy for her. Picking strawberries uses all the senses, Hunt said — touching, tasting, smelling, seeing, laughing.

“The only time I see people frowning it’s because their mom won’t let them eat any,” she said.

The worst part of growing strawberries to Hunt? Weather dependency, and not just for the plants themselves. If it’s cold, people don’t want to come out to pick strawberries.

Summer heat signals the plants it’s time to stop blooming. The cold makes strawberries shrink in on themselves just like people do when it’s nippy outside.

This year, Hunt’s Strawberry Farm began selling strawberries on April 7 — earlier than usual, thanks to the wild weather. They lost 70 percent of their first crop and experienced a lull between their first and second crop, but they never stopped.

Families get to enjoy strawberry shortcake this summer thanks to perseverant farmers like the Hunts all over North Carolina.

More than a history
Neighbor to Neighbor: Men’s Skin Health