The motel sits at an intersection kitty-corner to three others, all vying for the attention of travelers who might pass through this quiet corner of North Carolina, an 80-minute drive east of Chapel Hill, where long stretches of grass and farmland are interspersed with only the occasional general store or restaurant.

The couple has Room 124 at the back of the building, a tiny space crammed with two full-size beds, a bathroom, a vanity mirror and their belongings. These are scattered wherever space can be found: boxes of crackers and bags of bread, toiletries, stacks of files. A plastic bag of hush puppies sits on the dresser.

It’s only been two weeks since Eddie and Dorothy Wise were forced off their farm and into this room. It’s stocked like a full kitchen of groceries, while the rest of the couple’s belongings — a three-bedroom house full of furniture and a decades-long marriage worth of mementos — are stored four miles away in two storage units.

There isn’t any chair for guests to sit on, but Eddie is quick to offer a seat on one of the beds. He gives a firm handshake with callused hands and, for the most part, has the stern, direct, no-nonsense manner of a military man, retired U.S. Green Beret that he is.

Eddie’s demeanor is warmest, though, when he speaks to or about his wife Dorothy, whom he calls Brown Sugar. With health problems that hinder her mobility, Dorothy must use a wheelchair, but her mind is sharp and her tongue is clever, and she doesn’t take any nonsense, especially not from Eddie. He laughs as he tells the story of how she’s had him wait on her hand and foot while she’s been confined to this room as he searches for a new house for them. 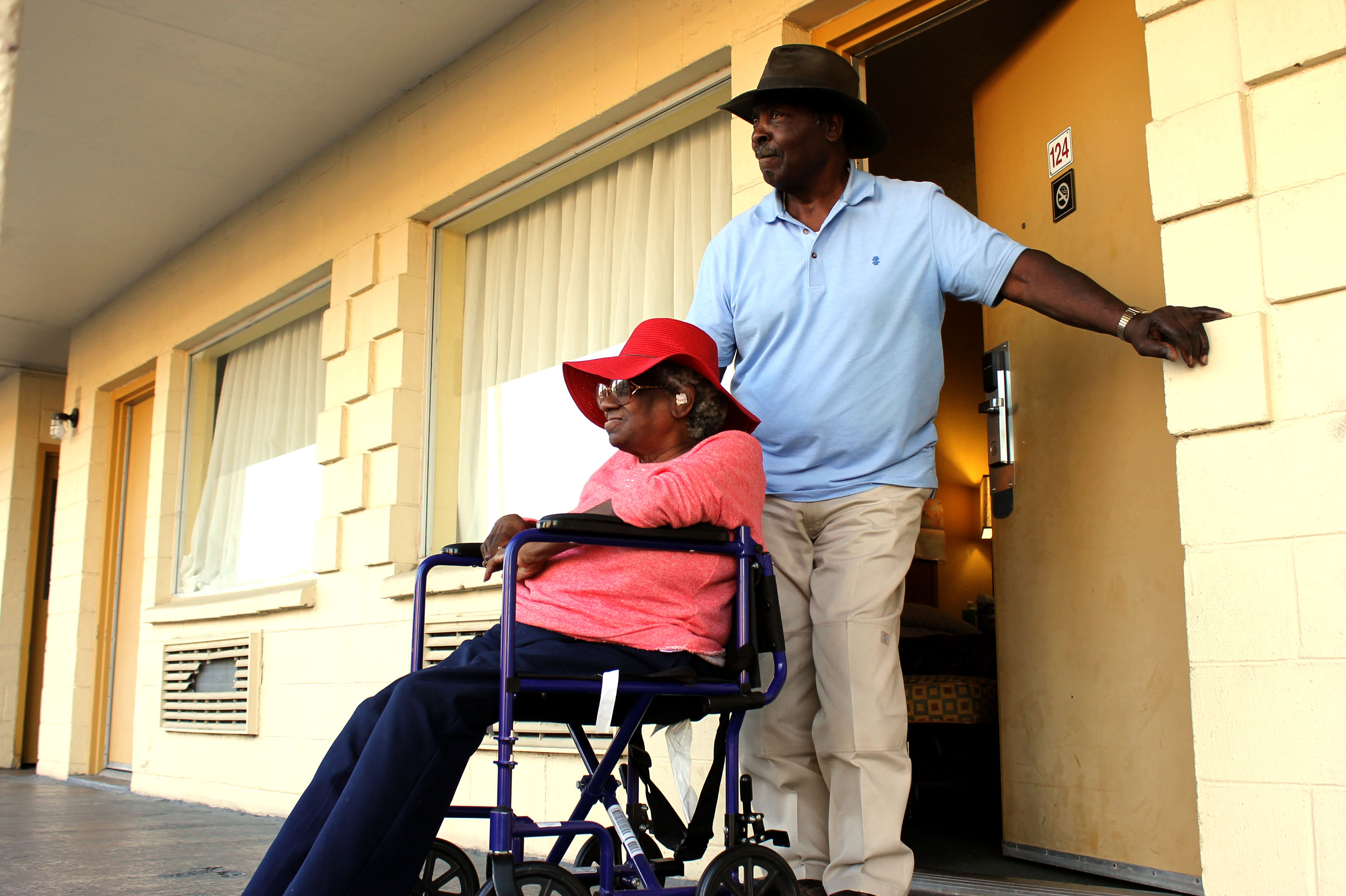 The Wises owned 106 acres of land in Nash County, which they acquired in the early ’90s and which housed Eddie’s small-scale hog-raising operation. Despite their best efforts to comply with the local farm service agency, the Wises’ farm was foreclosed on and then auctioned on April 7 due to the couple’s outstanding debts.

The Wises belong to a historied community of black farmers in North Carolina who struggle to keep their land in a state where the agricultural community is still sharply divided along lines of color.

Nash County, where the Wises live, is 56.8 percent white and 39.4 percent black. The Wises’ farm was 106 acres in Sugar Creek, the black community, which neighbors the white community at Red Oak. The median income in Nash County is $43,341, compared to Orange County’s $57,261, and 18.2 percent of its residents live below the poverty line, compared to 14.8 percent in North Carolina as a whole.

Between 1982 and 1997, North Carolina had the largest decline in black farm ownership in the country at 66 percent. From 1992 to 2007, black farmers were five times more likely than white farmers to lose part or all of their land. Small farms have continued to disappear as industrial-level hog farming and big agribusiness take over the state’s agricultural economy.

The Wises filed a lawsuit against the U.S. Department of Agriculture and various employees of the Farm Service Agency in 2015, prior to the loss of their farm, which is still being litigated.

Paula Nicholls and Mike Huskey of the U.S. Farm Services Agency in Raleigh and Don Connelly, spokesperson for the U.S. attorney’s office in Raleigh, which is handling the case, declined to comment on the pending litigation but provided documentation of the case.

The Wises defaulted on several loans owed to the USDA through its agency, the FSA, as well as the Farmers Home Administration, allege court documents filed by the U.S. and Huskey in November 2015.

In 2011, after the FSA refused to extend the same financing terms that permitted the Wises to pay off their principal over a longer period of time, they defaulted on their loans, the court documents allege.

The loss of the Wises’ farm began at 8:30 a.m. on January 20, when Dorothy was still asleep. More than a dozen marshals in seven vehicles descended on the farm and ordered the couple to leave immediately, Eddie said.

John Biewen, a professor from Duke University’s Center for Documentary Studies who knew the Wises from a previous documentary project, was present and recorded audio and took notes on the scene.

“They come flying around the farm, 14 of them, armed in camouflage, carrying automatic weapons,” Eddie said.

“I looked around, and I saw fourteen white boys standing around holding automatic weapons. And I thought, ‘They’ve come to pop you. You go in the house and get ahold of Brown Sugar.’”

Eddie carefully helped Dorothy down the stairs to their home, and the two left the house together, he said.

On March 17, the Wises were allowed back onto the farm to collect their personal belongings.

On April 7, the Wises’ farm was auctioned and sold, Eddie said.

Huskey said a report of sale had not yet been filed with the court as of April 24.

A history of African-American farming decline

Horne said the past decade has brought another wave of decline that has threatened to decimate North Carolina’s black agricultural community.

“We might see another wave of foreclosure crisis in (the) farm community, and we’re definitely seeing increases in the African-American sector. I’m not surprised by this, given the fact that the brunt of the recession did hit African-American communities very hard, and continues to, with the tremendous loss of family wealth that occurred.”

Land Loss deals with a caseload spanning 100 counties. As a result, the firm offers its services only to the lowest-income farmers in the state. Horne said these members of the agricultural community have only become more discouraged.

“We’re beginning to see people talking about not being able to continue financially in the farming operation and generally being reticent about going to the government to get money or services because they don’t want to go down that road again,” Horne said.

Gary Grant, director of the advocacy group Concerned Citizens of Tillery, which deals with issues such as agricultural racism and the pollution especially of impoverished areas by industrial hog farms, has become an advocate for the Wises since their property was taken.

Grant’s family came to eastern North Carolina in 1947 to farm as part of a federal loan program for struggling sharecroppers.

A natural disaster in Halifax County in 1972 catalyzed 30 years of struggle for the family, whose farm remained in foreclosure for three decades.

“Our parents were $10,000 delinquent because of those disaster years. We tried to work out ways to pay, and the only thing they ever told us was unless we brought full amount, they were going to continue to foreclose,” Grant said.

The Wise suit was denied in federal civil court in September 2015; the judge wrote in her decision, “Plaintiffs do not face an ‘immediate’ sale of their property, nor is a sale scheduled to occur at a certain date or time,” meaning the Wises were not facing “actual and imminent harm.”

In the suit, Eddie alleges that in 2011, when his prior loan officer, a black man named Carl Barnes, retired, and Nicholls took over the role, she determined that the Wises would no longer be allowed to pay only the interest on their loans and would instead have to pay $3,100 in loan payments per month. Unable to pay and unable to get further assistance for the farm’s operation, Eddie says, he lost 500 hogs to a freezing winter.

Loan denials disproportionately affect black farmers in North Carolina, according to a study performed by the UNC Center for Health Promotion and Disease Prevention in partnership with the Land Loss Prevention Project that surveyed 20 black North Carolina farmers.

“These discriminatory lending practices included receipt of loans later in the season for Black versus White farmers and denial of loans for Black farmers,” the study reads. “This denial of loans has resulted in less ability to purchase up-to-date equipment and to expand the farm, making the farmers less competitive.”

Since taking ownership of his farm, Eddie said he felt he was targeted by the farm services agency. Though the Wises first attempted to acquire their farm in 1991, it was not until 1996 that they were finally able to get the loans necessary to begin running the farm.

From that point on, Eddie said loan officers either would not help him develop farm plans that would allow him to operate in a financially sound manner or would underestimate the amount of funding he would need to maintain a property as large as his and Dorothy’s.

Eddie and Dorothy intend to continue the appeals process now that their farm has been sold, and in the meantime, they’re spending $180 per week for their motel room and $150 per month for the storage units that house their belongings.

“We both have been under great stress,” Eddie said. “Our visits to our doctor have become weekly when before they were every six monthly.”

Dorothy lives with diabetes and arthritis. While working at Howard University, she suffered a fall that required her to get a bone transplant, resulting in her lack of mobility.

The UNC study explains that health issues such as high blood pressure are common in a profession that puts great financial strain on farmers and their families.

Eddie’s physician has warned that the loss of his farm could be a catastrophic enough change and cause enough stress for him to be at risk of a psychological breakdown, especially considering the stroke he suffered in July and his ailing knees from serving 27 years as a Green Beret, a member of the U.S. Army’s Special Forces.

Since the sale of his farm, Eddie said he is setting his sights forward on his pending lawsuit and finding a new home and land for himself and Dorothy — a task that has proven difficult because his credit is now so poor.

“People say, ‘How are you smiling when they took your farm?’ and I say, ‘What am I supposed to do? I’ve got to take care of Brown Sugar,’” Eddie said.

“She’s stuck with me through all the storms. Anytime I start thinking bad thoughts, I think about her.”