Five puppies between 6 and 9 weeks old littered the floor of the Puppy Development Center, exhausted after a day of socializing at the Carolina Meadows retirement community in Chapel Hill.
Two puppies bickered over who got the prime nap-time spot on top of the air vent. As well-natured puppies, they decided to share by flopping on top of each other.
“I’m pretty sure I have the best job in the world,” Sunny Westerman, adoption coordinator for UNC PAWS said.
UNC PAWS, which stands for Peer Assisted Wellness Support, allows mental health clients to interact with puppies while in the early stages of service dog training.
“The dogs are able to lower the heart rate and blood pressure,” Westerman said. “They also increase levels of oxytocin, which is a hormone that, among other things, reduces stress.”
The puppies spend most days out in the community, where they are socialized in situations that they may encounter as service dogs.
Located at The Farm at Penny Lane in Pittsboro, UNC PAWS started its Puppy Development Center in January.
The program partners with paws4people, a nonprofit organization based in Wilmington that breeds, raises, trains and places service dogs with veterans suffering from post-traumatic stress disorder.
“At the beginning, it was a lot of trying to figure out what worked best as a logistics model,” Bryan Ragan, program manager for UNC PAWS, said. 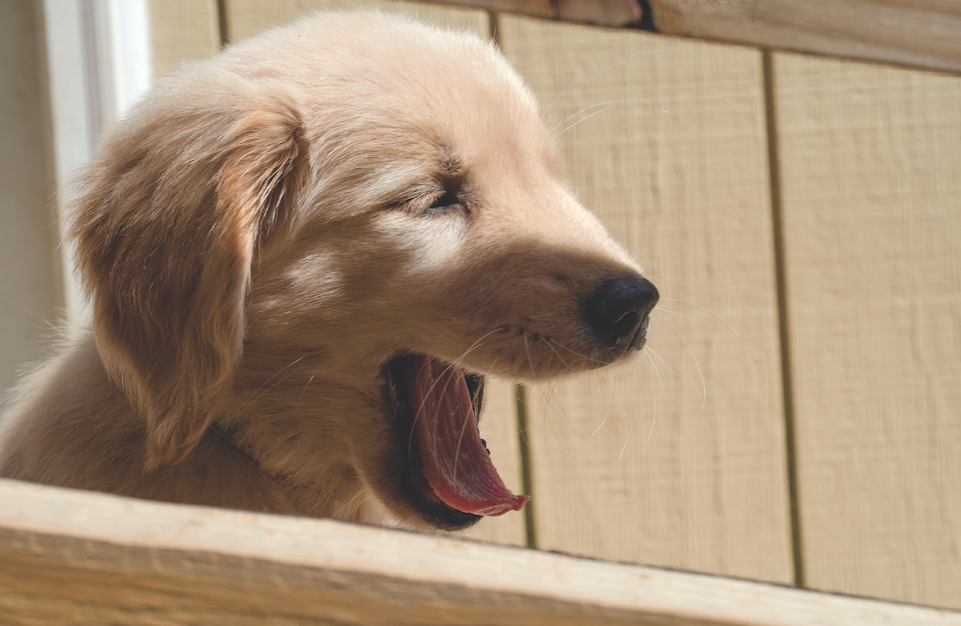 These service dogs are sometimes named in honor of fallen soldiers.
Cowboy, a black Labrador retriever puppy in the early stages of training at the Puppy Development Center, is named in memory of Capt. Dario Natale Lorenzetti, who was killed in 2012 by a suicide bomber while serving in Afghanistan.
Paws4people breeds the puppies specifically to be service dogs, which are then delivered to the center to begin training. Westerman, who oversees the puppies’ socialization and time at the center, said they usually use Labradors and golden retrievers for service dogs. These breeds have a friendly and social demeanor and the level of intelligence needed to be a proficient service dog.
Westerman receives the puppies at about 6 weeks old and oversees their socialization for the next 10 weeks.
Being so young, these puppies of course require a lot of attention.
Westerman and two part-time staff members take care of the puppies throughout the week.
The puppies are with a staff member from 6:30 a.m. to 9 a.m., then Westerman cares for them from 10 a.m. to 6 p.m. Another staff member covers the last shift, which ends at 10 p.m.
Volunteers also play a huge role at UNC PAWS. They care for the puppies on the weekend in two-hour shifts and serve as “puppy pals” on outings in the community.
The community outings not only socialize the puppies, but also benefit every part of the community the puppies interact with.
“We take them places like the police department, the local Rotary Club and Carolina Meadows,” Westerman said. “Really anywhere they will need to go as service dogs.”
Clients with the UNC Center for Excellence in Community Mental Health are able to come and help socialize the puppies.
“Being around with these puppies can be therapeutic for clients,” Westerman said. “They help us be present in the moment, to not worry about the future and just be calm.”
After their 10 weeks with Westerman and volunteers at The Farm at Penny Lane, puppies must move on for their next step in training to be a service dog.
“As hard as it is to see the five go, I get five new ones to socialize right away,” Westerman said.
Cece Miller, deputy operations officer for paws4people, explained what goes on once the puppies move on for more advanced training.
“At 16 to 20 weeks old, the puppies are transferred to a women’s correctional institute in West Virginia to begin learning the command matrix,” Miller said. “There are about 100 commands to learn, and the assigned inmate works with the puppy 24 hours every day.”
Around 130 inmates at a time work as paws4people trainers. These inmates must meet a long list of criteria to even be considered, including a spotless disciplinary record since they have been incarcerated. If accepted into the program, they must undergo 21 weeks of academic training before they receive a dog to train.
“It’s considered somewhat of an honors program within the prison,” Miller said. “The inmates receive no special treatment, but are able to live and work together with the other trainers with puppies.”
The puppies live with the inmates training them and go everywhere with them. The puppies help rehabilitate the inmates and give them a sense of companionship and responsibility, while the inmates train the puppies to grow up to be well-behaved service dogs.
“In a way it’s like the inmates get to give back to the community,” Westerman said. “If you believe that you’re in prison because you have taken something or been invaluable to the community, training a service dog is a way to contribute.”
The inmates train the dogs until they have learned the command matrix and are ready to meet a client, Miller said.
“It’s usually about a year of training with the inmate,” she said. “But depending on the dog and the trainer, it could be slightly more or less.”
In the paws4people model, it is not the client who chooses the dog, but the dog who chooses their client.
“To pair the service dogs with a client, we go through something called a ‘Bump,’” Miller explained. “Four or five clients meet the dog, and we watch how the interaction goes.”
The client that the service dog reacts best to is the one it is paired with, effectively “choosing” its client to serve. The Bump ensures that the service dogs are paired with the clients they most strongly bond with.
This model through UNC PAWS, paws4people and the West Virginia inmates allows the community to give back to veterans suffering from PTSD.
“We are always looking for reliable, trustworthy people to cover two-hour puppy play shifts on Saturdays and Sundays at the Puppy Development Center at the Farm at Penny Lane,” Westerman said.
Westerman also said she hopes to get student organizations involved with the puppies through volunteering and fundraising for the program.