A happy ending for neglected animals

Katrina Greely was six years old when she saw a lion walking around her neighborhood on her way home from school. Her childhood friend’s family kept the lion as a pet, and occasionally brought it through the community.

“I will never forget walking home one day. I just happened to glance over and, there, on a leash, was a lion,” she said. “I was a young girl, and I did exactly what you’re not supposed to: I ran.”

Greely now works as a volunteer at Pittsboro’s Carolina Tiger Rescue, a nonprofit wildlife sanctuary that works to protect exotic animals in the wild and in captivity. Incidents like parading a dangerous, wild animal around a residential area are exactly what the Rescue works to prevent.

The Rescue is home to 13 tigers, five lions, three cougars and a number of other exotic animals. Each has its own background and, often, a heart-wrenching story about how it came to be at the Rescue. A few were found abandoned as cubs on the side of a highway in Charlotte, while others came from a backyard zoo in Alabama. A good number of the animals were kept as pets until the owners realized they were not capable of giving them proper care.

Greely said one serval, named Elvis, was dropped off one morning at the front gate. A serval is a wild cat native to Africa that is bigger than the standard house cat, weighing anywhere between 15 and 40 pounds. He was in a dog crate with a note attached that asked the staff to take good care of him. “Please love me tender,” the note read, and it was signed “Elvis.” She said this occurred after the Rescue received a phone call asking the organization to take in a pet serval their friend could not take care of anymore. They hung up after being told there was no extra room.

For years, the Rescue has been trying to get legislation passed banning the ownership of tigers in North Carolina. It is illegal to own bobcats, foxes, squirrels and skunks in the state, but there are no laws prohibiting the ownership of exotic animals. Any animal that is of foreign origin, or not native to the U.S., is considered an exotic animal.

“They try to pass the law every year, but the legislatures keep pushing it back,” Greely said.

Rep. Verla Insko (D-Orange) said people should not be allowed to own tigers.

“I don’t think that we need to have individuals having tigers in their apartments or houses, or backyards,” she said.

Executive Director of the Rescue Pam Fulk said the biggest issue with having tigers as pets, or other exotic animals, is the danger it poses to the community. The Rescue is strongly opposed to wild animals being used for entertainment, circuses and captive breeding. It also believes that wild species should not be kept out of their natural habitats, and that captivity is only acceptable under necessary conditions, such as when the animal can’t survive unaided or when they were illegally removed from their habitat.

“It seems to me that the most important thing about the Rescue is the core values. They are one of the key things that separate us from other places that call themselves sanctuaries, but don’t meet the federal regulations,” Fulk said. “Those core values drive every decision the Rescue makes.” 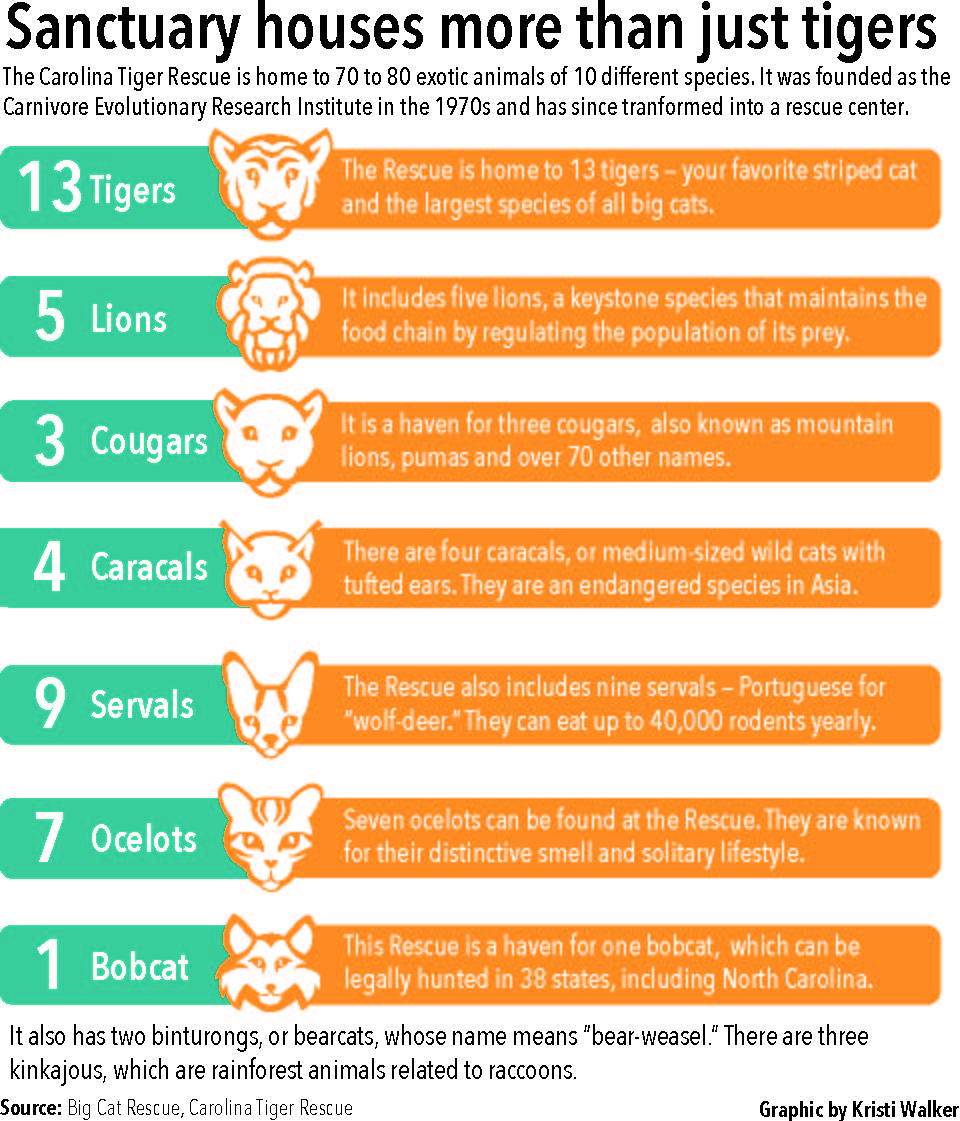 The Rescue offers weekly public tours, when guests can personally meet the animals. Twilight Tours are offered from April to October and begin after 5 p.m., when the animals are most active.

On the tour, you are guided through the sanctuary and introduced to each animal on the tour path. The guide shares the animal’s story and its unique personality traits, while feeding it a few treats. You’ll meet Jellybean, a Tiger who was bred for the entertainment industry and then deemed not good enough.

Jellybean doesn’t like his food to touch the ground but happily poses for pictures. Collins the bobcat, named after Phil Collins, is another animal you’ll encounter. He was kept as a pet and his owners had all four of his paws declawed.

All the animals have time for daily enrichment, Greely. For enrichment, meat is put inside various items that are safe for the animals to tear through and play with. These items are then put in the cages. She said it’s a way for them to have fun and break free from their normal routine. Pumpkins, Easter eggs, Christmas trees and boxes are all popular enrichment items.

“The animals out here all love Christmas trees,” said Greely. “They love the scent of them. So we get a lot of donations after Christmas.”

The Rescue gets most of its income from individual donations, but also holds annual fundraising events like the Black Tie and Tails Ball. This year, the ball raised a little under $28,000. Fulk said people can also donate supplies that are continuously used to care for the animals, such as toilet paper and paper towels. Adopting an animal, becoming a member and volunteering are additional ways to support the Rescue.

The annual operating budget is about $926,000, Fulk said. The operation cost rose a few years ago when a nearby chicken processing plant shut down. The plant previously donated $80,000 worth of chicken each year to the Rescue for the animals to eat. She said the closing caused the food cost to increase overnight.

Greely has been volunteering for three years and said her favorite thing about the experience has been educating the community.

“I like teaching people about the animals, like where they come from, and why they don’t make good pets,” she said. “When you hear each animal’s story, you realize these animals should not be kept in small cages.”